About:
The Insidious Dr. Fu-Manchu by Sax Rohmer is a novel which first introduced the famous villain. The novel was first published in 1913. 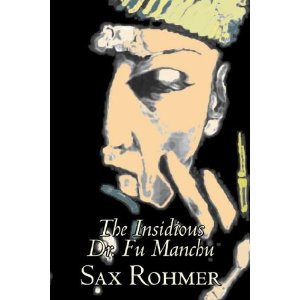 My rating for The Insidious Dr. Fu-Manchu – 3
Buy this book in paper or electronic format
More books by Sax Rohmer
Part of the League of Extra­or­di­nary Gen­tle — Men of la — Book Chal­lenge (Vol. 1)

Thoughts:
The Insidious Dr. Fu-Manchu by Sax Rohmer is an easy, yet superficial read. The greatest claim to fame is introducing this arch villain which was the model for many others to come after him.

This is not actually a novel, but a collection of short stories and hence lacks depth and character development (which I can only assume is the fault of the format). Each story contains a few short chapters about the “Yellow Peril”. There is constant action, constant peril and, again due to the format, constant narrow escapes by Fu-Manchu at seemingly the last second.

Dr. Fu-Manchu is has become to represent embodiment of evil, a master of alchemy (for poison gas), a brilliant physician, leader of assassins and vicious animals, a specialist of torture and of arts of darkness. Add those qualities to a name which practically rolls off the tongue and you can understand why his name became synonymous with villains.

The plot revolves around the Asiatic threat and Fu-Manchu’s diabolical plan to restore China to its former glory and replace the British Empire with a Chinese one. Of course the British see this as a threat to the white race as a whole.
Why?
Good question!

Fu-Manchu is a contradiction, he prides himself on being a patriot as well as the head of a crime syndicate (much like Lucky Luciano who helped the US during WWII), he heals those he wounded as long as they don’t interfere with his nefarious plan to take over the world and prefers not to murder if he can help it. Yet he laughs with pleasure at the sight of British police dying in one of his traps.

The dialog in the book is somewhat stiff and the writing is wooden at times. A word of warning to the easily incensed – this novel’s sentiments about race and morality are… well… over 100 years old and we shall leave it at that. As I mention in other posts, it is unfair judge others by today’s standards, Rhomer believed that the British Empire was a good thing (at the time almost half the world was under a British flag), and saw the emerging China as a real, credible and existential threat to the prosperity he, his family and friends enjoyed.

The most interesting part of the book was to read how Rohmer’s Western world saw the Yellow Peril and East Asia. That part of the world was, and still is, hard to understand and only recently has been penetrated by outsiders. It is unclear just how much understanding the author had of that region, customs and cultures. In some parts of the book it seems as Rohmer is appreciative of the culture and its contributions, and in another part it seems as if he disgusted with the idea of its existence.

Synopsis:
Dr. John Petrie, a physician and our narrator, meets his friend Denis Nayland Smith who served as  British police commissioner in Asia. Smith seems to know all things Asia and the innate ability to get all the support he needs from British government officials. Petrie is, of course, knowledgeable in medicine, forensics, chemistry and an ace with a pistol – for good measure.

The pair investigates murders, the opium trade, gets into death trap and more all with the common denominator of the Shakespearean looking but devilish Fu Manchu.

BOOK BLOGGERS – Have you read The Insidious Dr. Fu-Manchu? If so link up your review below: