May the fourth be with you! Zohar asked me to talk a little bit about writing Star Wars material for “Star Wars Day,” a fun little play on words that became an internet holiday. 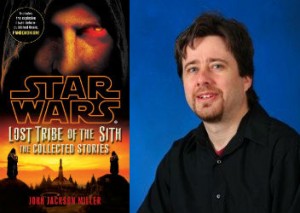 As a kid, I read the comic book adaptation of Star Wars before I saw the movie — it was pretty difficult to get into in 1977, in the days before multiplexes. Soon afterward I read the Splinter of the Mind’s Eyenovel by Alan Dean Foster, and the Han Solo novels by Brian Daley; on the comics side, I continued to read the new stories appearing in Marvel Comics’ ongoing series. It was great for a Star Wars fan to get a regular fix of the galaxy far, far away — and I think that I always considered the licensed books and comics to be part of the whole Star Wars experience.

The number of licenses dropped in the late 1980s after the movies ended, but there was a lot of pent-up demand for more Star Wars material. West End Games got the ball rolling with its Star Wars Roleplaying Game, and then Timothy Zahn’s Heir to the Empire novel at Del Rey and Dark Horse’s new Star Wars comics really re-energized the milieu. Well before the prequel movies came out, the studio had done something unusual by declaring that everything that happened in the “Expanded Universe” was canonical, and had also happened to the movie characters; there was no pecking order between the different media. What happened in comics affected what happened in the games and novels, and vice versa.

So when I began writing for the Galaxy Far Far Away in the mid-2000s, it was a lot of fun to be able to move between the different media. I wrote the Knights of the Old Republic comics series — now available in nine volumes and a new monthly comics arc — but I also cowrote the Knights of the Old Republic Campaign Guide for the role-playing game. More recently, I’ve brought both prose and comics in on the same storyline: my Knight Errant novel from Del Rey is both preceded and followed by Knight Errant comics I wrote for Dark Horse. You don’t have to read one to enjoy the other — but it all fits together into a larger framework.

Up next, I have the collected edition of Lost Tribe of the Sith, a group of e-book short stories that I wrote for a Del Rey promotion over the course of 2009-2012. We’ve brought those together with a new novella by me just for the collected edition. It’s a totally different take on the Star Wars universe, following a group of Sith castaways on a planet with no technology across centuries of exile. It’s just one more example, I think, of how the Star Wars universe allows for a lot of different kinds of stories to be told. It’s a big galaxy!

Readers can find my works at http://amzn.to/jjmiller — and can also check out my Faraway Press website (http://www.farawaypress.com), where I keep a behind-the-scenes page on every prose story, game, and comic book I’ve ever done. You can also find me on Twitter at @jjmfaraway.