About:
Private Empire: ExxonMobil and American Power by Steve Coll is a non-fiction book about the influence ExxonMobil yields over world economy and politics. While the book has many aspects of the company’s agenda, whether it be science or politics, with clarity and zest. 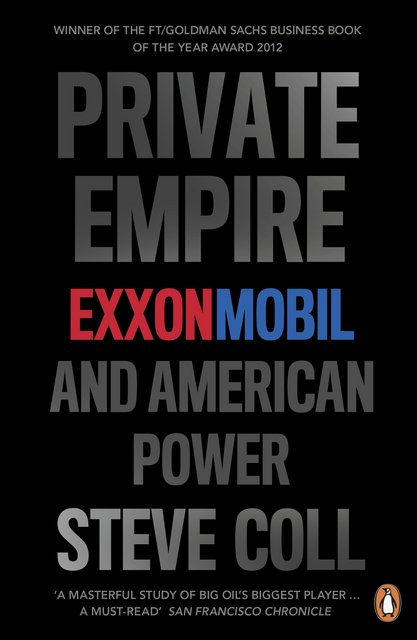 My rating for Private Empire – 5

Thoughts:
Private Empire: ExxonMobil and American Power by Steve Coll is a compelling book about one of the biggest, most powerful and influential American companies ever created. One aspect of this book is fascinating; the other is a disturbing to realize the sway a private entity has over the affairs of the union.

Mr. Coll, a Pulitzer Prize winning author, quickly goes through the history of the company, from its inception by John D. Rockefeller as Standard Oil, through its break up by Trust Busters in 1911, the emergence of Exxon and the merger with Mobil Oil. Together with the United States, Exxon grew in power throughout the 20th Century to dominate the world’s oil market and wield significant political power.

The author chose to write around the tenure of CEO Lee Raymond to tell the story. Through Raymond’s eyes the reader understands how decisions are made, governments come and go and the rise of this global private empire.

The chapters I found fascinating, and a bit frightening to be honest, were the ones involving ExxonMobile’s security forces. After an executive Sidney Reso has been kidnapped and killed Mr. Raymond revamped the company from a security perspective. Essentially ExxonMobil became its own state with internal security (filled with ex Secret Service agents), jet fleets, soldiers (working for ExxonMobil or for a foreign government which the company paid) and a new building designed for secrecy in Dallas, TX.

In all its rigidity, ExxonMobil changes with the times. After “investing” $722,000 in political action committee money in 2008 (I call it bribes), the company decided to support a carbon tax once Obama was elected, adjusting its stance to continue its close relationship with Washington’s new administration.

Throughout the book it is told of the company’s unending pursuit for safety (including employees’ private lives) and efficiency in a worldwide context and contest. As CEO Raymond is quoted in saying: “I’m not a U.S. company and I don’t make decisions based on what’s good for the U.S.“.

This book is by no means anti-corporate, it presents the world as ExxonMobil board might have presented them, including their views on world climate, political violence and lobbying efforts.

Synopsis:
The book is composed of 28 chapters, including excellent footnotes and is divided into two parts. Part I is called The End of Easy Oil and part II is called The Risk Cycle. Instead of devoting another whole book (or two) for the complete history of the company, Mr. Coll chose to start with the Exxon Valdez incident in March 1989 which shaped the company as we know it today.

The Exxon Valdez incident was a defining moment for the company and is covered in detail. It is a proper beginning (even though not “the” beginning) because it clearly shows how future CEO Lee Raymond would revamp Exxon’s structure and behavior using the tragedy.

BOOK BLOGGERS – Have you read Private Empire? If so link up your review below: