Jerusalem, Book One: The Boroughs by Alan Moore is a novel that takes place in a small section of Northampton, England but in different times and planes. The narrative is told through several people, some experiencing the same events, and some seemingly disconnected from the overall storyline. Mr. Moore is known for his influential graphic novels, including Watchmen, and V for Vendetta.

I received this book as a gift about a year ago, and started reading it several times, but was never in the right mindset to do so. This time, however, I decided to just go ahead and take the plunge. Since it’s a very long book, and difficult to read. The narrative takes me about four times longer than my usual reading speed, and that, if I don’t have to re-read the section.
And I do have to re-read sections.
Almost every page.

So, I decided to write posts about some of my favorite sections of the novel, before a final review. 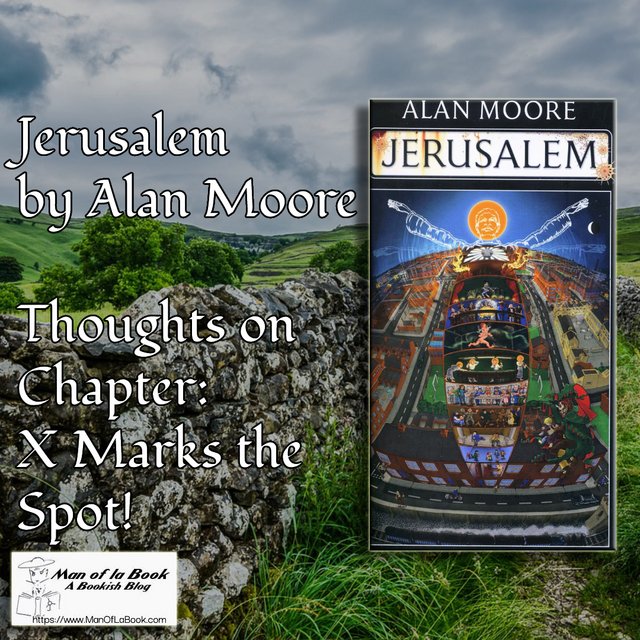 One of the chapters which made a specific impact on me in Alan Moore’s Jerusalem, Book One: The Boroughs was X Marks the Spot. Even though this is one of the first chapters in the book, it took me a while to get to it and make sense of the space/time/metaphysical aspect of the storytelling.

I really should have expected it, being a fan of Watchmen. But I wasn’t – so here we are.

This is the first chapter in which we see events from a different perspective than that of the Vernal/Warren family. Michael Warren spent some time, as a child, in a state between life and death. As an adult, Michael got into an accident which made him remember those events. His sister, Alma, is an artist which bases her works on her “crazy” brother’s experiences. The Vernall/Warren family are working-class people, with a neck for insanity that spans generations

This chapter reminded me of a few other books I read. No surprise, of course, as a person going on a journey is a cornerstone of many stories. The fact that Hamtun, has magical properties all of its own was somewhat unique and frankly took me a few tries to understand that. Strange since our protagonist is a monk who takes his religion as an ideology and not necessarily at its most fantastical aspects.

Unlike the other chapters, which are basically short stories, this one was somewhat linear. We have no actual history of Brother Peter. It’s a messy story, but not as ugly as the previous, or future chapters. Halfway through the book, however, I still have no idea what it had to do with the rest of the story.

While it took me some time to read the previous chapters, especially Rough Sleepers, I couldn’t see what this chapter has to do with the story. I am looking forward to seeing if we’ll meet Brother Peter again.

Synopsis of this chapter:

Brother Peter, a monk in the 700s Medeshamstede, is on a long pilgrimage through Spain, hoping to get to Jerusalem. When we meet him, Brother Peter is back in England, thinking that Mercia is its center, so it must be Hamtun.  From my research (i.e. googling), I discovered that Hamtun was a Saxon city at around that time, it was a very large twon (4,000 – 5,000 persons), and was an important port. This is where the “Ham” in Hampshire comes from.

Brother Peter has been tasked, by who or what we don’t know, to bring an object to a place in Hamtun. This place, the center of England, has its own mythology and magic, it’s almost a living being for the purposes of the story. Peter, an open-minded monk, sees religion as ideals, not necessarily history. He starts dreaming, and has visions in which he sees Hamtun from the air, and encounters an angel which sent him on his quest.

The object is a heavy stone from Jerusalem in a bag, which has given Peter a callous on his shoulder. At the end, upon reaching his destination and delivering the stone to Saint Gregory’s church, Peter dies of a heart-attack, knowing he succeeded and that something other than eternal darkness awaits him.

Zohar — Man of la Book
Dis­claimer: I got this book as a gift
*Ama­zon links point to an affil­i­ate account, the money is usually spent on books

Article Name
Jerusalem by Alan Moore - X Marks the Spot
Description
Unlike the other chapters, which are basically short stories, this one was somewhat linear. We have no actual history of Brother Peter. It’s a messy story, but not as ugly as the previous, or future chapters. Halfway through the book, however, I still have no idea what it had to do with the rest of the story.
Author
Man of la Book
Publisher Name
Man of la Book - A Bookish Blog
Publisher Logo