Jerusalem, Book One: The Boroughs by Alan Moore is a novel that takes place in a small section of Northampton, England but in different times and planes. The narrative is told through several people, some experiencing the same events, and some seemingly disconnected from the overall storyline. Mr. Moore is known for his influential graphic novels, including Watchmen, and V for Vendetta.

So, I decided to write posts about some of my favorite sections of the novel, before a final review. 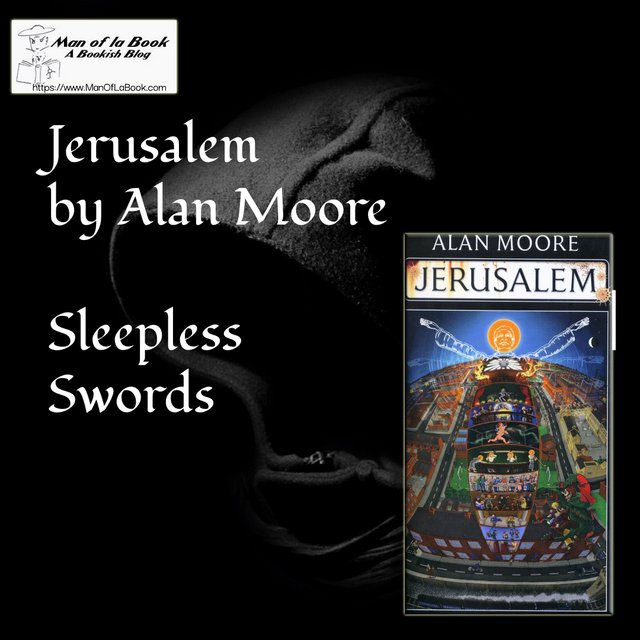 As I previously mentioned, this book is a slog. Book One: The Boroughs was somewhat confusing and, at least for me, difficult to understand. However, I found Book Two: Mansoul, to be much more enjoyable. This part takes place in the afterlife, it’s very imaginative, funny, and engaging.

My favorite chapter is Sleepless Swords, which is told from the point of view of (another) new character called John, or Handsome John. John died during World War II, in France from a shell. Immediately after dying, John was transported to the Boroughs because his home was his last thought.

John also knows the family of Michael Warren, but he keeps the story of the family to himself. Neither we nor John, are exactly sure why but at least we can take a good guess at it. We also get a few more interesting aspects of the ghost world. We know it’s in black and white, but they also have some “fairy food”, not that they need it, as well as ghost objects. For example, they take underground rides in the ghost of a crashed military plane.
Very inventive to say the least.

This chapter is mostly about English history. The children, with Handsome John, Phyllis, and others go to look at the English Civil War, and Oliver Cromwell. I honestly don’t know what it has to do with the story at large, but it was interesting nonetheless. It’s almost as if Moore wanted to share his knowledge with the reader, writing an anarchist manifesto while he’s at it.

There’s more to this chapter, of course. Michael Warren sees his own grave, the kids meet young Cromwell (the older one is dreaming), and several puns which I can only assume I missed in the first book. Frankly, I don’t know enough about English history, or Northampton to know if it was the stronghold that Moore says it is – but I have no reason to doubt him either.

Zohar — Man of la Book
Dis­claimer: I got this book as a gift
*Ama­zon links point to an affil­i­ate account, the money is usually spent on books

Article Name
Jerusalem by Alan Moore – Sleepless Swords
Description
This chapter is mostly about English history. The children, with Handsome John, Phyllis, and others go to look at the English Civil War, and Oliver Cromwell. I honestly don’t know what it has to do with the story at large, but it was interesting nonetheless.
Author
Man of la Book
Publisher Name
Man of la Book - A Bookish Blog
Publisher Logo