How Beautiful We Were by Imbolo Mbue is a multi-generational saga taking place in a small African village, being ravaged by an American oil company. Ms. Mbue is an award-winning writer, this is her second novel. 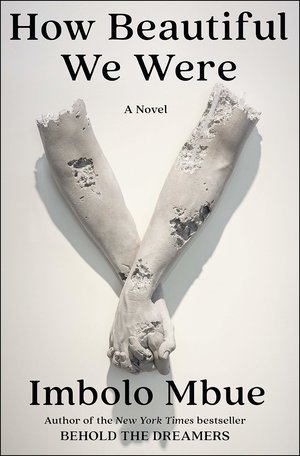 The past tense of the title, How Beautiful We Were, is already an ominous sign that this will not be the usual book. Nevertheless, this novel is beautiful and somewhat upsetting, especially to western eyes.

A heartbreaking part of the novel was Kosawa’s villagers unlimited faith. In particular, they truly believed that they could explain their plight to the right people at Pexton, they would care. Those in power would right all the wrongs they’ve been subjecting them to the past several decades.

Hence, during a meeting with the company’s representatives, the village’s madman, in a rare moment of clarity, holds them hostage until they can get some answers. And so the story begins.

Imbolo Mbue clearly finds communal living beneficial, however she does not romanticize it. By comparison, life in an Israeli kibbutz can be very similar, with emotional ranges and no consensus, even though certainly a more comfortable existence.

The novel is, in a word, fatalistic. Undoubtedly the villagers are fighting a lost cause, but they don’t know it – and it’s a punch to the gut. The David vs. Goliath story slowly morphs into a nuanced philosophical conflict on how to stop a slow moving giant wheel. An impossibility from the beginning to the very end.

Blame is shifted from an unethical corporation to a careless government is. Without a doubt, one of the disturbing themes of the book, among several. The reader, not surprisingly, would like to shout at the villagers. They’re playing a game, not knowing the rules which are, coincidentally, consistently changing.

All in all the novel was thoroughly thought through, the author doesn’t throw things together hoping they stick. She casts a wide net, and bring them all together to form a coherent story.

In the early 1980s, the fictional village of Kosawa, in an unnamed African dictatorship, kidnap the representatives of Pexton, an American oil company. To clarify, for decades Pexton, has destroyed Kosawa’s environment with oil spills, poisoned water & air. Not surprisingly, self-sufficient village finds itself in the mercy of a corrupt corporation, with a corrupt government unwilling to help, turning a blind eye from decades of dead children for a few dollars.

Thula grew up in Kosawa, is inspired by books with revolutionary themes. Through an NGO that specifically took up Kosawa’s cause, Thula gets a scholarship to study in American. In college and afterwards, Thula becomes an activist, above all to help Kosawa and her people.

The story is told from several points of view, significantly from one just titled “The Children”. This collective voice gives an idea of the undeniably communal hardship being suffered.

Buy How Beautiful We Were from Amazon.com*
More Books by Imbolo Mbue*

How Beautiful We Were by Imbolo Mbue