“Heart of Lies” by M.L. Malcolm (website | Facebook) is the fictional tale of a family, inspired by the author’s husband, which takes place after World War I until the early days of World War II. 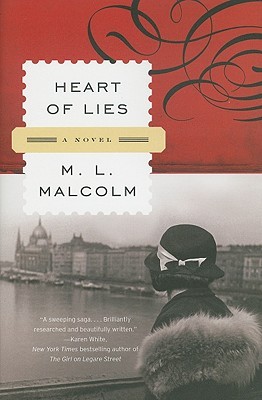 “Heart of Lies” by M.L. Malcolm is a well written novel, with interesting characters and a fast read. Ms. Malcolm certainly knows how to write exotic scenery and move a story forward.  The international setting is exquisite, taking place mostly in Shanghai, the reader travels to Hungary, France and New York.

While I did enjoy the book I felt that the mystery was one of the weakest points, as it is more a character study of a man trying to run away from his past. World War I and World War II are mentioned only in passing, but that’s understandable as the book starts in the aftermath of the first war and end in the beginning of the second, while mostly taking place in the sanctuary of Shanghai.

The book is supposed to be romantic, but I didn’t find it so. While I did find the characters interesting, I didn’t think they were well developed and fell somewhat flat. I wasn’t sold on Leo and Martha’s relationship – OK, she’s beautiful and he’s handsome – but there is more to a relationship than beauty or a damn good one night stand.

That being said, the story did capture my attention and Ms. Malcolm writes in a style which is both well written and very easy to read.  I have to commend Ms. Malcolm for trying to weave several different genres into one book – part historical fiction, part romance, part adventure and business intrigue. Maybe it didn’t work as well as she hoped, but it is a great effort and an interesting read from that standpoint.

My advantage of reading this book is that I already had the second one “Heart of Deception” on my shelf. So instead of reading it as a standalone novel, I knew there was more to come.

So tell me, would you prefer to error on the side of characters or storyline?

Leo Hoffman, ex Hungarian solider who fought for the losing side, has an ear for languages and ambition. However, Leo is tangling with the wrong people and is being forced by circumstances to leave Europe for the perceived safety of Shanghai.

Shanghai is good to Leo, he becomes a wealthy man, meets the right type of people and marries  Martha, the love of his life. However, the Japanese invasion puts and abrupt end to their fairy-tale life and Leo is forced to make some excruciating decisions.

Zohar — Man of la Book
Dis­claimer: I got this book for free as part of the TLC Book Tour pro­mo­tion.
*Ama­zon links point to an affil­i­ate account, the money is usually spent on books

BOOK BLOGGERS – Have you read “Heart of Lies”? If so link up your review below

Heart of Lies by M.L. Malcolm