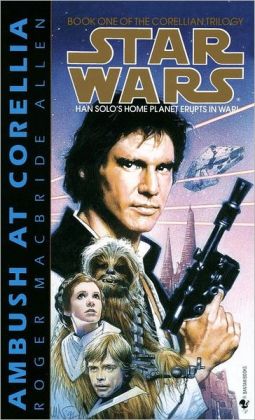 2/5 Rancors – Roger MacBride Allen’s Ambush at Corellia is the first volume of the Corellian Trilogy and was published in the heyday of the Bantam Spectra Star Wars license in the 1990s. Set fourteen years after Return of the Jedi, this story sets up a conflict in the Corellian system, which comprises five planets and three distinct sentient species. Han Solo is a native Corellian and a trade conference brings him and his family back home after many years away. Overlooking an early warning of danger brewing in the Corellian system, Han and Chief of State Princess Leia, along with Chewbacca and their three children, all travel together to attend the summit. Events start building towards a crisis and by the book’s resolution, full-out war threatens the entire system.

Despite the action implied by the plot summary, I found this book a slow read. At its core, it felt like an elongated setup for the next two books, one that could have been condensed into a few chapters. It’s mildly interesting learning more about Corellia, and the system itself is one of the more intriguing of the galaxy far, far away. Its mix of three species plus various outside influences from the Empire and New Republic creates a potent stew of simmering tension. This material is good background and perhaps will pay off in the next two volumes, but taken on its own there simply wasn’t that much to this story.

The Solo family is at the center of the novel, especially with the revelation of the identity of the Human League’s Hidden Leader at the climax. Leia continues to be a sympathetic and inspiring figure as she deals with balancing work and family life. We explore some of Han’s emotions as he revisits his past on the Corellian trip, but this exploration doesn’t illuminate anything significantly new about his character. The three children are frequently present but don’t get the limelight as often as they did in The Crystal Star. One oddity in the portrayal of the children is Anakin behaves more like a toddler than a seven-year-old, both in speech and in actions (at least, based on my own 2.5 year-old daughter, who talks quite a bit like Anakin in this book).

The “B” plot follows Lando, Luke, R2-D2, and C-3PO as they embark on a quest to find Lando a rich wife. This is as silly as it sounds. I can understand that Luke might need a break from carrying the weight of the galaxy on his shoulders, but a Jedi Master wasting time on a trip like this is a lot to swallow. Lando is a good character but surely Mr. Allen could have found something more meaningful for him to pursue: this plot would have been better left “off-screen,” as it were.

Ambush at Corellia is not a difficult read or particularly long. It simply felt slow because of the dragged-out storyline. The stage is set in the climax for the rest of the trilogy to accelerate significantly, so it will be interesting to see what follows.

3/5 Rancors – Ambush at Corellia is the first book in The Corellian Trilogy. In this initial story, Han and his entire family plus Chewie go back to his home world of Corellia for a trade summit and a vacation. Han also plans to show his kids the world where he grew up many years ago. The level of excitement in the family is high. However, as usual, things are not as simple as they seem to be.

Shortly before the trip, Han is visited by an operative from New Republic Intelligence who informs him that many things are going wrong in Corellia and that he needs to be careful on the trip. The warning is couched in mysterious terms. Han decides to go ahead with the trip against his best judgment. On the approach to Corellia he realizes that things are in fact going wrong, and the problems escalate from there. The five inhabited worlds of the Corellian Sector are on the brink of civil war and the once peaceful co-existence of the three leading races – human. Selonan, and Drallan – has come to an end. By the end of the book Han and Leia find themselves trapped on a world about to explode in violence unless they can meet a fanatical Rebel leader’s impossible demands.

All of this sounds good, but I kept feeling that nothing much was actually happening. Possibly the next two books in the trilogy will pick up. I also had significant problems with a venture that Lando and Luke are involved in, i.e., finding Lando a rich wife. None of this rang true at all to me. I cannot imagine Lando being a part of such an effort, and I don’t know as yet why we should care.

Time to move on to the second book, Assault at Selonia.