The English GI by Jonathan Sandler (illustrated by Brian Bicknell) is a graphic memoir of the author’s grandfather, a British man who joined the US Army and fought in Europe during World War II. This is Mr. Sandler’s first book, adapting his grandfather’s WWII memoir, an inspiring endeavor indeed. 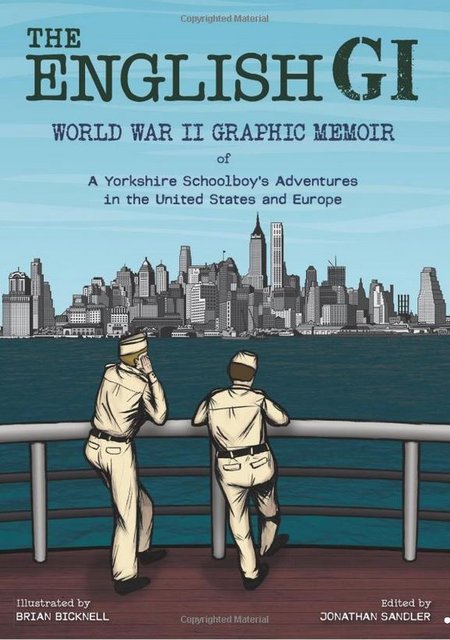 Every time I see one of these memoirs, I feel a pinch of regret for not writing one while my grandparents were still alive.  In The English GI author, Jonathan Sandler created an interesting, immersive experience not only for his family but for the audience at large as well.

The illustrations by Brian Bicknell, are clear as well as used to move the story forward. The author used as much first-hand information as he could from his grandfather’s memoirs.

In addition to the main narrative, there are some excellent additions that have been added. These additions, by the way, take about half the book. They include an epilogue about Bernard and his beloved wife, Taube, the fates of the rest of the Sandler family, the general history of the war, and personal family photos which really tie up the whole book.

One of my favorite parts was when young Bernard Sandler discovers the joys of being a young man in New York City. As one could imagine, it is both scary and exciting to be away from family, in a foreign land. To his credit, however, Mr. Sandler managed to make the best out of a harrowing situation. He started college, went to the theater, made friends, and met the love of his life.

Joining the US Army, Mr. Sandler found himself in Europe. So close to his parents, yet still far away unable to visit. The emotional reunion, as one would except, was well told.

I’m glad I read this book, and once more, extremely jealous of Mr. Sandler for having the courage to create it. The book certainly does deserve to be read and appreciated.

Bernard Sandler, a 17-year-old English boy from Yorkshire is on a school trip to the United States and finds himself stranded and separated from his Jewish family. It’s September 1939, and World War II has escalated.

A young man alone in New York City, it’s not that bad though. Bernard finds a circle of friends, and independence, and attends New York University. His life changes, however, in 1941 when the United States enters the war. Drafted in the Army, Bernard returns to Europe as part of the 26th Infantry division.

The English GI: WORLD WAR II GRAPHIC MEMOIR OF A YORKSHIRE SCHOOLBOY’S ADVENTURES IN THE UNITED STATES AND EUROPE by Jonathan Sandler