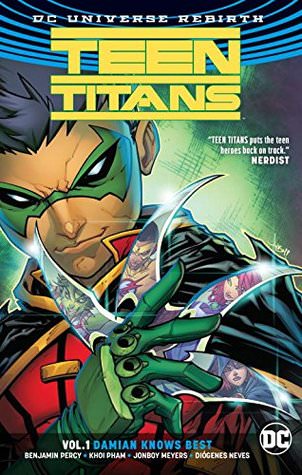 Thoughts:
It seems as if the snarky Damian Wayne (Robin) has captured the imagination of many of DC’s writers and artists, rightly so since he is a great character. In Teen Titans Vol. 1: Damian Knows Best by Benjamin Percy (illustrated by Jonboy Meyers) Damian tries to lead the Teen Titans (Starfire, Raven, Beast Boy, and Kid Flash) whether they like it or not.

I felt this story is a cliché, the Teen Titans accept Damian as some sort of leader, while teaching him a few social graces, while making him realize that he doesn’t need to be a jerk all the time. Batman, the detective that plans for every contingency under the sun, has not planned to show up, or even somewhat acknowledge his son’s birthday.

I believe teens and tweens might enjoy this story a lot more than this old man, but it was actually a lot better than I expected, and I can only hope it would get better. I believe the creative team assumed, rightly so, that this is someone’s first issue and hence we got an introduction to all the characters.

The art is strange, I can’t put my finger on it but I know that I liked some of it, but not the rest. I enjoyed some of the jokes, this issue, however, is all Damian Wayne – if you like him you’d like this graphic novel.

I also can’t help it, but read the characters in their voices from Teen Titans Go cartoon series.

Synopsis:
The Teen Titans find themselves helping Damian in a war against his grandfather, Ra’s al Ghul and the entire League of Assassins.