About:
Super Sons (Rebirth) Vol. 1: When I Grow Up by Peter J. Tomasi & Chris Burnham (Illustrated by Jorge Jimenez & Alejandro Sanchez, colored by Dennis Culver & Alejandro Sanchez) is a graphic novel which tells about the partnership between Damian Wayne, a gung-ho Robin, and the straight laced Jonathan Samuel “Jon” Kent,  Superboy. This graphic novel collects issues #1-5 of the series. 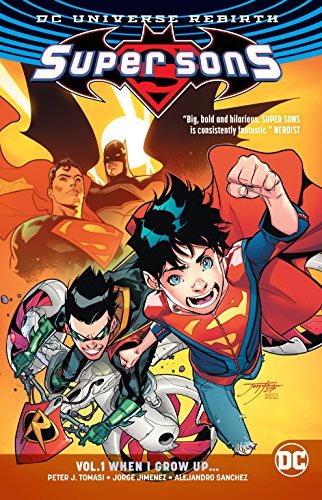 Thoughts:
About half way through the graphic novel Super Sons (Rebirth) Vol. 1: When I Grow Up by Peter J. Tomasi & Chris Burnham (Illustrated by Jorge Jimenez & Alejandro Sanchez, colored by Dennis Culver & Alejandro Sanchez) I noticed that I’m enjoying this book way more than I should. It was a real nice surprise and I’m glad my friend recommended it to me.

The relationship between the arrogant Damian and the straight laced Superboy is funny and endearing, but also strained while the two boys learn to play off each other’s strengths and weaknesses. Damian’s sharp tongue and “let’em have it” attitude is in direct contrast to Jon’s stubbornness and fortitude. The relationship with the parents, fathers especially, also plays and important part in the story. While Superman has faith and trust in Jon, he keeps him on a short leash, on the other hand Bruce Wayne (who doesn’t come off as parent of the year), doesn’t trust Damian as far as he can throw him, but gives him much more room to operated.
Jon’s relationship with Lois and Damian’s with Alfred are also touched on, but are not as strong focused as they are on the fatherly side. Maybe DC Comics can hire a female writer to deal with these storylines?

The art is very good, not only does it move the story forward, but captures the two boys perfectly and enhances it. I can honestly say that the smirks on Damina’s face and the stubbornest in Jon’s eyes enhanced the story much more and allowed my brain not only to process what the words say, but also how they were said.

I’m looking forward to reading the second issue of this graphic novel. This issue exceeded by expectations (which were low for the subject matter, but elevated due to the creative team and the excellent Rebirth story-lines I have been reading).

Synopsis:
Damian Wayne is an arrogant Robin, son of Bruce Wayne and Talia Al Ghul. Damian has been raised by his mother until he reached the age of ten, which at that time she promptly left him to be raised by h is father. Damian who has been trained by the League of Assassins is violent and thinks the world revolves around him.  Jon Kent is the son of Superman and Lois Lane, he has a strong moral compass which Damian seems to know how to manipulate.

The two young “almost heroes” take on their own villains, refusing to call their fathers to help them with the situation.