About:
Shazam! The New Beginning  #1 by Roy Thomas & Dann Thomas (art by Tom Mandrake) is a graphic novel which retells the origins of Shazam. This graphic novel was originally published in 1987. 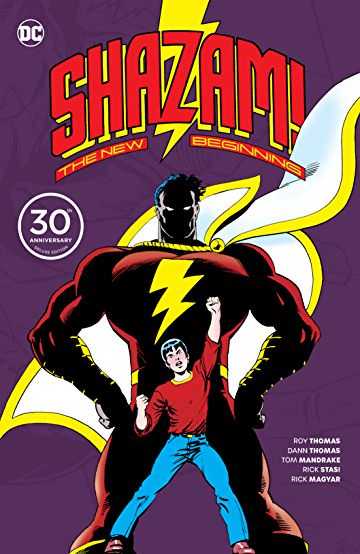 Thoughts:
My daughter took out the graphic novel Shazam! The New Beginning  #1 by Roy Thomas & Dann Thomas (art by Tom Mandrake) from our local library – she never read it, but I did. This is a bit darker version of Shazam, which I liked but felt the book, as a whole fell a bit short.

I did not know what to expect from this graphic novel, I’m not a big Shazam fan (never was), but I did enjoy Alex Ross’ interpretation in the magnificent Kingdom Come. The art by Tom Mandreake was very good, as a whole it brought more enjoyment from this reboot.

Overall this was a noble effort, especially on an origin story which is always difficult to re-tell. While I like the gritty versions of superheroes, this one didn’t work for me – maybe because it involved a young boy.

Zohar — Man of la Book
Dis­claimer: I borrowed this graphic novel from the public library.
*Ama­zon links point to an affiliate account