Lucifer Vol. 1: The Infernal Comedy (the Sandman Universe) by Dan Watters (illustrated by Max Fiumara and Sebastian Fiumara )expands on the expensive universe created by Neil Gaiman.  The Sandman is a series of comic books following Dream (Morpheus, among other aliases), and is one of the few graphic novels to grace the New York Times Best Seller list. 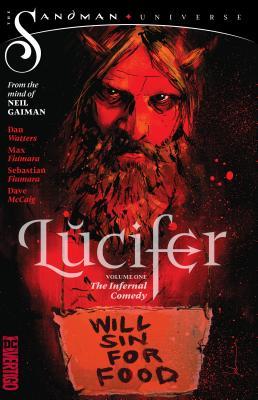 This issue is supposed to be the second which tries to expand Neil Gaiman’s Sandman universe, I haven’t read any of the others (if they’re even out), but if Lucifer Vol. 1: The Infernal Comedy (the Sandman Universe) by Dan Watters (illustrated by Max Fiumara and Sebastian Fiumara) is any indication to how it’s going to be, I’ll make a point to do so. The world of Dreaming was introduced to me when I finally read Sandman, I wouldn’t think that other creators would be able to expand it (and honestly, why not?), but we’re all the better for it.

The story starts in the middle, and uses lots of flashbacks to bring the reader up to date, which makes the book slow, but it still works pretty good. There are many interesting things going on, Lucifer is either depressed or sarcastically funny. English poet William Blake is Lucifer’s sidekick, I didn’t know much about him so I did a little research, and while I still don’t “get” poetry, I found Mr. Blake’s style to be in-line with the Sandman style of writing.
Or is it the other way around?

The writing and artwork work wonderfully together and build off each other, establishing creatures and fleshing out a whole world, with gorgeous settings one could look at over and over. I was pleasantly surprised by the moving and suspenseful story about characters which come off less than likeable, but a delight to follow along with.

This volume was a joy, mixing Christian mythology with the Sandman Universe works surprisingly well. The book was easy to follow, fascinating, telling an interesting story.

Lucifer finds himself as an old, blind man, living in a small house, in a small town where nothing happens and no one can leave. He realizes that he is actually trapped in a prison, but with memory of how he got there, or even why. Slowly Lucifer goes through the notions of reuniting his son with his mother, while figuring out which characters has jailed him.

In Los Angeles, a cop whose wife died of cancer, and is now facing brain cancer himself is looking for Lucifer, to kill him.