About:
Kingdom Come by Mark Waid and Alex Ross was a four issue comic book mini-series published in 1996. The absolute edition comes with quality printing, hardcover, slipcase and additional material. 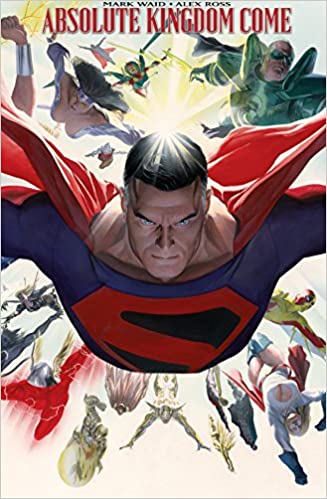 My rating for Absolute Kingdom Come – 5

Thoughts:
Kingdom Come by Mark Waid (website) and Alex Ross (website) was the mega comic book event of the 1990’s. The story is complex and has multiple layers upon layers opened to interpretation by the reader. The artwork is breathtaking, which shows almost every DC character that has existed before 1990, the gauche paintings could be looked at for hours. They are, in fact, so complex that a separate guide of characters had to be created.

The authors of this book wrote an multiple layered story examining politics, ideals, success and failures while the battle between the old and the new guard takes place. The heroes need to enforce peace, yet embrace violence to do so What limit does one put upon oneself when fighting in the name of peace.

The artwork, as mentioned before, is absolutely amazing. Alex Ross’ characters jump from the page and his style of photo realism works amazingly well in a universe where everyone is dressed in tights.

Examining Communism, police states in broad strokes this book asks many questions which are contemplated but left unanswered. Through Norman McCay, a human, the reader experiences the story as an all-seeing spirit with a touch of philosophy, sophistication and intelligence. Kingdom Come is one of the most important series in the DC universe, to which the affects can still be felt to this day.

The story takes place in the future, the Joker, on his last murderous rampage, massacred the staff of the Daily Planet (including Lois Lane, Jimmy Olson and Perry White) and was killed by a new superhero named Magog. But Magog has nothing to worry about, he was acquitted by the jury in the cold blooded murder he committed. The appalled Superman retreats into his Fortress of Solitude failing to realize his importance as a constant inspiration to the world and its heroes.


The narrator of the story is preacher Norman McCay who is suffering from a crisis of faith. McCay is also good friends with Wesley Dodds, the original Sandman and the nightmares which aided Dodds fighting crime are transferred to McCay who is convinced he is going insane. However, McCay meets the Spectre who recruits McCay to bear witness to the upcoming apocalypse.

Superman is coaxed back into action by Wonder Woman, a decade after he retreated. He enters a world where supervillians no longer exist and superheroes fight among themselves without any regard to the mortals around them. Superman also discovers that in one of the battles, the heroes where attacking Parasite who panicked and tore apart Captain Atom, destroying the state of Kansas.

Superman tries to reform the Justice League. Batman, who believes Superman ideals are outdated, forms his own group of non super powered heroes. All the while, Lex Luthor organized his own “Mankind Liberation Front”. While Superman’s Justice League are busy gathering captives in a jail called “The Gulag”, Batman enters into a pack with the MLF until he learns of Luther’s plans to gain controls of the world by having Captain Marvel kill Superman. The only superhero capable of such feat.

From this point thing escalate quickly, The Gulag is broken, Superman and Captain Marvel battle it out and the UN sends out nuclear missiles. I won’t spoil the ending…

Zohar – Man of La Book
Disclaimer: I bought this book

BOOK BLOGGERS – Have you read Kingdom Come? If so link up your review below:

Leave a Reply to Julie @ Knitting and Sundries Cancel reply