About:
Justice League: A League of One by Christopher Moeller is a graphic novel about the famed group of heroes, banded together for grand adventures. Mr. Moeller is a writer and painter, his graphic novels are fully painted. 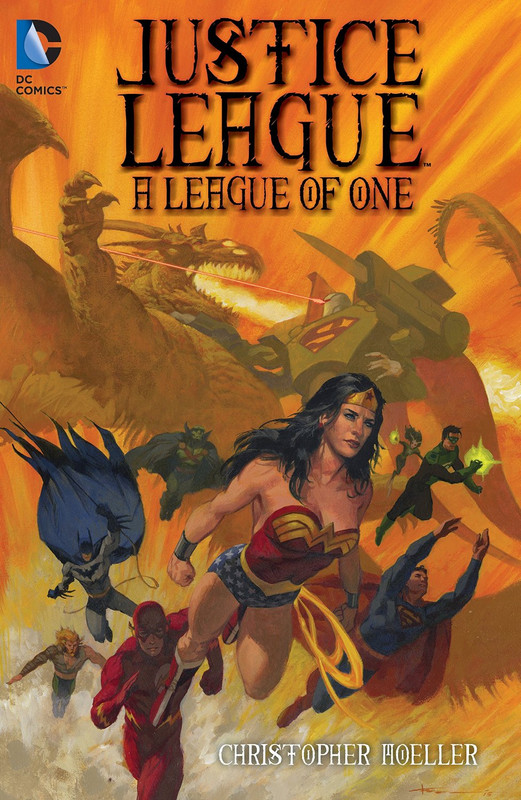 Thoughts:
The kids and I happen to be in the library shortly after seeing the wonderful Wonder Woman movie. We went to pick their “summer reading”, my daughter has a list, my son who is younger gets a list from his parents.
Reading the books was a challenge last year, but they did it, and we are hoping for a better reading summer this year.

Our local library tries to encourage kids to read by building on current pop-culture phenomena, taking advantage of the massive marketing campaigns they’ll never be able to wage or afford. Building on the enormous publicity around the movie, the library installed a table filled with Wonder Woman related books and graphic novels. One of the graphic novels was this one, which my daughter promptly picked.

The first thing I noticed about Justice League: A League of One by Christopher Moeller were the wonderful paintings. The vivid colors which brought forth the heroes we all know and love make an impact the eye cannot resist.

The paintings work wonderfully for the first story, built around Wonder Woman who has a difficult choice to make. The panels and splash pages add a powerful visual punch to a wonderful story and move the story forward effortlessly and quickly.

I enjoyed the mythology which the writer incorporated in the first story, actually is based very much on mythology. For example the dragon’s breath that corrupts creatures into obliging servants was a piece of mythology not often noticed by many.

The second story is pure comic fun, the JLA meets an alien race and gets involved in a battle which has taken place for decades. Once the team gets there, the stakes become higher and one wonder if even the mighty DC gods will be able to fix the damage. This is a silly story, but I didn’t think the realistic paintings, as wonderful as they are, worked on this one.

This book works on many levels, the first Wonder Woman story is a solid, well built, well written adventure which asks of the heroine to make brutal decisions and deserves all the praise I can give. The second story, while still enjoyable, is simply not in the same league (pun intended).

Buy Justice League: A League of One from Amazon.com*
More Books by Christopher Moeller