About:
Injustice: Gods Among Us Year Four Vol. 1 by Brian Buccellato is a graphic novel which brings the familiar DC Comics superheroes and Greek gods together again. This graphic novel collects issues #1-6. 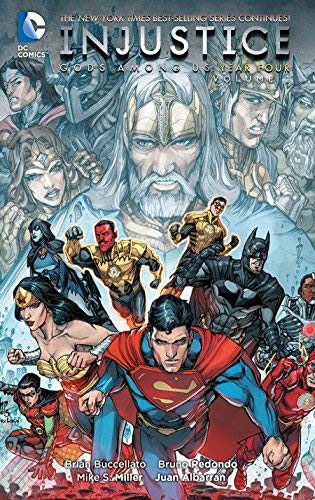 Thoughts:
I thought the idea of Zeus facing Superman and the League (the modern Olympus) was a good idea, and was looking forward to see how Brian Buccellato would implement it in Injustice: Gods Among Us Year Four Vol. 1. I realized that this would be a demanding story, but I would expect nothing less from my favorite heroes.

This graphic novel asks, and tries to answer, a lot of good questions. What would happen if Zeus reveals himself and demand that all religions be abandoned in his favor? How would Superman fair against the Greek gods? How will the world react to proof of the existence of the Greek pantheon?

I found the story to be difficult to follow, there are so many twists and shifts in allegiances it made the story convoluted instead of interesting. Batman comes off looking bad and is being duped way too easily into Ares’ hands.

One of the issues with having so many characters “star” in a graphic novel is that there is very little character development done. For me, one of the strengths of DC’s stories are the ground breaking secondary characters which make the main story-lines so much better.

While the book, as a whole, kept my interest, I wasn’t captivated by it. I found the story to be uneven, but a good effort nonetheless.

Synopsis:
The Greek gods have decided that Superman is not worth to rule Earth, and are making a bid for our planet. Zeus brings the Amazonian Army trapping Wonder Woman in the middle of this mass.