About:
Batman, Vol. 7: The Wedding by Tom King (illustrated by Tony S. Daniel and Mikel Janin) is a graphic novel which culminates the story-line where Batman (Bruce Wayne) and Catwoman (Selina Kyle) are set to get married. This graphic novel collects Batman #45 – 50. 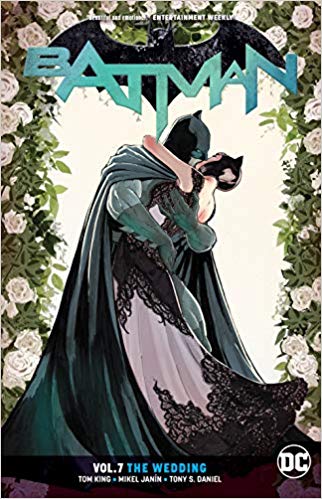 Thoughts:
I loved this whole run of Batman, I was looking forward to every issue and was excited to finally get my hands on Batman, Vol. 7: The Wedding by Tom King (illustrated by Tony S. Daniel and Mikel Janin.  While I was guessing the ending from the beginning (SPOILER: they didn’t’ get married), I was disappointed from the way it happened.

Tom King has proved himself, time and time again, to be a masterful storyteller, but this one fell short. It simply didn’t make any sense to me. The reasoning which Catwoman gave for her actions are ludicrous considering the history of the engagement.

I also didn’t care for the side stories, Booster Gold was never a favorite and his plot was just OK. There are a whole bunch of side stories as well, which I couldn’t figure out if they’re fillers, part of an over arch, or just some side stories the author wanted to tell.

I enjoyed the artwork very much, it’s slick and dynamic. The graphic novel is filled with alternate versions / visions of Batman and Catwoman, including some cool movie outfits she never wears in the comics.

I think the biggest disappointment was the fact that DC Comics is not willing to grow Batman’s character. It shouldn’t be that big of a deal, Superman got married and had a kid (something I thought was an awful idea, but great to really like) – and anyway, they reboot the whole universe every decade or so anyway.

Synopsis:
Nothing is ever easy for Batman and Catwoman . The two fell in love, but getting married isn’t as easy as they think. First, no one can know they’re married, second they have many people, friend and foe, try to push their noses into their business.
Throw in some time travel in the mix as well.

Zohar — Man of la Book
Dis­claimer: I borrowed this book from a friend.
*Ama­zon links point to an affil­i­ate account