About:
Batman Vol 4.: The War of Jokes and Riddles (Rebirth) by Tom King (illustrated by Mikel Janin) is a graphic novel which pits the two villains against the caped crusader.  This graphic novel collects issues #25 – 32. 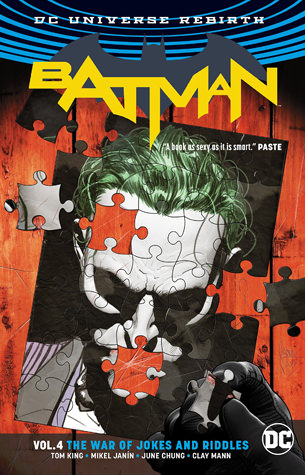 Thoughts:
Batman Vol 4.: The War of Jokes and Riddles (Rebirth) by Tom King (illustrated by Mikel Janin) is a departure from the series, not because of storyline or style, but because it is mainly about the villains and not about Batman. This graphic novel even goes further than the two main villains with a tragic side story of a lesser known villain with the comedic name of Kite-Man, here given a very sad story and ending.

Mr. King lets The Joker and The Riddler to shine in this issue. I have never found The Riddler to be much of a challenge in previous incarnations, but this Riddler is a true equal to The Joker, just as manipulating, devious and evil.

I liked the artwork as well, but on several pages Batman just looked jagged and funky. I remember because it distracted from the story, but I thought the character design were solid (especially The Riddler).

I didn’t think the storyline was as epic as it was in Bruce Wayne’s head. Yes, he made a mistake but… he’s Batman. I don’t see him kicking himself over it for years and years.

Synopsis:
Bruce Wayne (Batman) believes that  Selina Kyle‘(Catwoman) needs to understand him better before their relationship moves forward, so he tells her a story of an all-out war between Joker and Riddler and himself. In the process he confesses on how he lost his soul in the process of trying to end the war which was tearing Gotham City apart.

Buy Batman Vol 4.: The War of Jokes and Riddles from Amazon.com*
More Books by Tom King