About:
Batman, Vol 2: I Am Suicide by Tom King (illustrated by Mikel Janín and Mitch Gerads, colored by June Chung, and lettered by Clayton Cowles) is a continuation of the DC Universe Rebirth Batman. This graphic novel collects issues Batman 9-15. 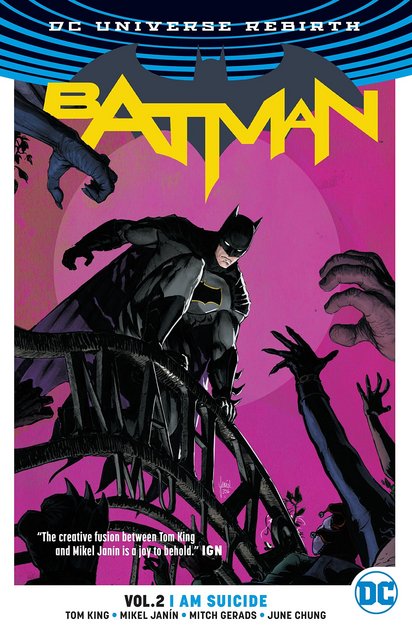 Thoughts:
I truly enjoyed Batman Vol. 1 and did not dare to hope for a continuation which will match it. Not only have my hopes been answered, they have been surpassed. Batman, Vol 2: I Am Suicide by Tom King (illustrated by Mikel Janín and Mitch Gerads, colored by June Chung, and lettered by Clayton Cowles) knocked it out of the park.

The relationship between Batman and Catwoman, their internal monologues and how they open up really drove this book. There is more character development in this single graphic novel than, probably, decades of other comics. The writer manages to write inner monologues in the voices of Batman and Catwoman which not only contrasts the two, but connects them as well so the reader knows what attracts them to one another.

The art of this book is fantastic, absolutely gorgeous and moves the story forward in leap and bounds. The fighting scenes are smooth and seamless, showing a lot but in an easy to follow manner that does not confuse the reader. The art also captured perfectly the relationship which I wrote about previously.

Tom King is quickly becoming one of my favorite storytellers. This is a superb graphic novel, where story and art meet to create a fantastic storyline for old and new fans to appreciate.

Synopsis:
Batman puts together his own Suicide Squad and leaves Gotham to retrieve a villain who is threatening Gotham City from Bain’s kingdom.

The real meat of the story, however, is Batman and Catwoman’s relationship.