About:
Batman/The Flash: The Button Deluxe Edition by Tom King & Joshua Williamson (illustrated by Jason Fabok and Howard Porter) put the two heroes together for an adventure which also introduces The Watchmen into the DC Universe. This graphic novel collects Batman #21-22 and The Flash #21-22. 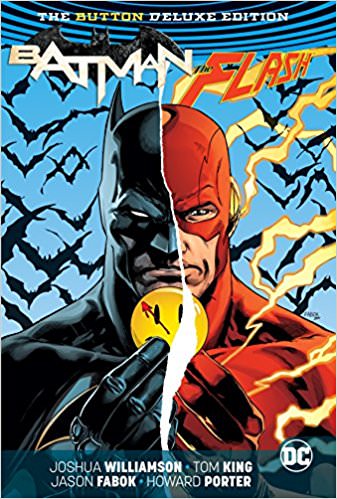 Thoughts:
Batman/The Flash: The Button Deluxe Edition by Tom King & Joshua Williamson (illustrated by Jason Fabok and Howard Porter) is a nice collection and a great presentation of the story.  The story-line is solid overall and the art is very good.

One has to know quite a bit about the Rebirth story-line and before in order to fully enjoy this story (Flashpoint being the main one). Frankly I don’t mind that. I know that many editors would like every issue to keep in mind that “this could be someone’s first issue they pick up” but at some point you also have to tell a good story and throw a bone to the old fans as well.

While I enjoyed the story as a whole, I failed to see the point of it. Maybe it will become clear in future issues and graphic novels but the big awaited Watchmen tease didn’t deliver in this story. Basically I felt as if I didn’t learn anything new and the alternate universe which Batman and The Flash have gone to has been already done. Also, The Flash needs another schtick besides that cosmic treadmill, it’s 2018 and this deus ex machina is getting old.

Synopsis:
Batman finds a mysterious smiley-face button stained with blood in the batcave’s wall. Batman soon realizes that the button is not from this universe and recruits The Flash to help figure out the mystery.

The mysterious button gets stolen by the Reverse Flash, Batman and The Flash have to follow him to a parallel world to get some answers.