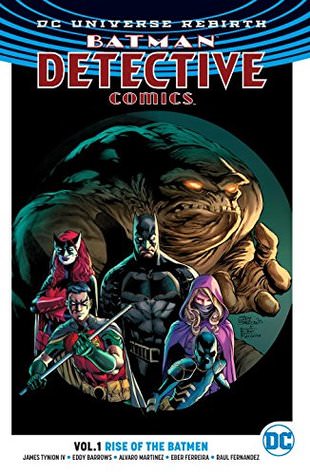 Thoughts:
DC is hitting it out of the park recently. I enjoyed most of the new line of graphic novels (a few exceptions here and there of course), Batman: Detective Comics Volume 1: Rise of the Batmen by James Tynion, IV , illustrated by Eddy Barrows really captured my imagination, telling a great story with excellent art.

The strength of this graphic novel is the story. A well told, interesting and fresh look at an old concept, Batman never worked well as part of a team-up, he knows it and they know it but here the hero has to swallow a bitter pill and simply suck it up.
Not to mention that the team are up to par and can match skills with him and the enemy.

I enjoyed the standalone Batwoman books previously, and have always enjoyed the story of Orphan (Cassandra Cain), previously known as Batgirl. Orphan is the daughter of David Cain, an assassin, and Lady Shiva, a lethal martial artist and assassin who specializes killing with her bare hands. As a child Cassandra was ruthlessly trained to become the greatest assassin in the world.
And that’s just the beginning

The Batman in this book shows more emotions than previous incarnations, it might not be Batman-like but it certainly makes the graphic novel more interesting. The art is dynamic and interesting, well drawn and colored to perfection.

Even though there are a few deus ex machina elements (all of the sudden Spoiler is an ace hacker) the story is very enjoyable and delightful. I’m looking forward to reading volume 2.

Synopsis:
A fighting force which has modeled themselves after The Dark Knight has invaded Gotham City, going after Gotham’s vigilantes. The group’s weapons, equipment, and tactics seem to be based on Batman’s own equipment, but no one knows who they are.

Batman knows he cannot go after them alone, so he assembles his own fighting force including Batwoman, Red Robin, Spoiler, Orphan and Clay Face.