Batman: Detective Comics, Vol. 8: On the Outside by Bryan Hill & Michael Moreci (illustrated by Miguel Mendonca, Phillip Briones, and Sebastian Fiumara) is a graphic novel which continues the story of the aftermath of the events which led to the Gotham Knights team take down the monster they helped create. This graphic novel collects issues #982-986. 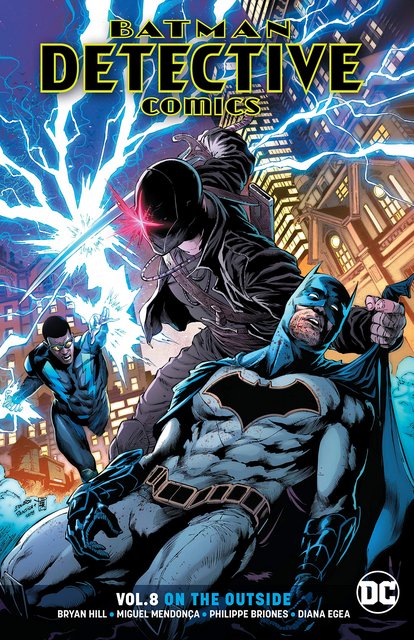 The ideas which drive Batman: Detective Comics, Vol. 8: On the Outside by Bryan Hill & Michael Moreci (illustrated by Miguel Mendonca, Phil Briones, and Sebastian Fiumara) aren’t new, Batman’s past actions come back to haunt him. However the writers do execute them in a different way, making Bruce very protective as he realizes that he is doing no favors to the people who trust him.

The new villain, Karma, is very interesting with dark origins, a well done villain and a very good opponent for the Gotham Knights. The interaction of Black Lightning with the team really speeds up the story. I’m sure there are some tie-ins to the Black Lightning TV show, I don’t watch the show and I didn’t feel I lost anything of the story because of it.

The art is very good, powerful and dynamic, the action sequences are strong especially the ones featuring Batman or Orphan. The tone of the book is very similar to the previous ones, which really helps follow it. I do like different renditions in comics, but I do not like styles change abruptly mid-story, or sometimes even mid-issue.

I really enjoyed this book, as it is a complete story with plenty of material to be used later on. I’m looking forward to the new run of this character and his team.

Batman (Bruce Wayne), Batwoman (Kate Kane), Red Robin (Tim Drake), Orphan (Cassandra Cain), Azrael (Jean-Paul Valley), Batwing (Lucas Fox), as well as a few other heroes known as the Gotham Knights took down a monster which, ironically enough, they helped created. Their battle isn’t over, however, as our battle scarred heroes are trying to physically and emotionally recover from their ordeal.

The young heroes of Gotham, do not intend to simply stand down, while resenting that Batman assigned Black Lightning (Jefferson Pierce) as their new guide. Also introduced is a new villain, Karma (Wayne Hawkins), who can read minds and be a step ahead of everyone.

Zohar — Man of la Book
Dis­claimer: I borrowed this book from a friend.
*Ama­zon links point to an affil­i­ate account

Batman: Detective Comics, Vol. 8: On the Outside by Bryan Hill & Michael Moreci