About:
All-Star Batman and Robin The Boy Wonder by Frank Miller is a graphic novel about the superheroes. The art by Jim Lee and Scott Williams is amazing. 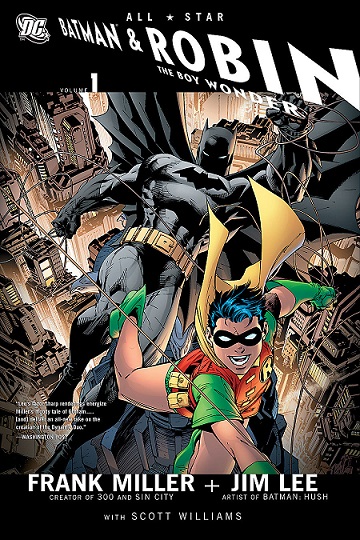 Buy this book  from Ama­zon.com

Thoughts:
All-Star Batman and Robin The Boy Wonder by Frank Miller is a comic book for grown ups. There are curses, unabashed sex, and the hero who keeps being referred to and refers to himself as “the G-ddamn Batman”.
A nice touch I thought.

This is a fun book which tackles Batman’s multiple personas head on. How can a book about a maniac running around in tights dressed as a bat while putting a teenage boy in constant danger have multiple personas you ask?
Let me tell you.

Miller likes to play with his heroes. They are not perfect and love what they’re doing a bit too much. This version of Batman is having a blast, he runs around stomping criminals, busting crooked cops, hurting rapists and impressing women. In fact, at some point Batman says he’s having so much fun he hasn’t slept for days.
Much like Superman who’s alter ego is Clark Kent, Batman takes over Bruce Wayne. Yet Batman is simply a vigilante at this point, he beats the hell out of people and keeps going. He has no relationships, no challenges, no cares – just living on the edge and taking everyone with him.

I liked this aspect of the story. We always see our heroes restrained, it’s fun to see them go all out for ones.

For those who don’t know, Robin was introduced in the comics to keep them light because Batman was, well… The Dark Knight. However, Miller introduces Robin (Dick Grayson) as a grieving orphan being a ward to a drill sergeant who doesn’t care about anything except getting the job done. Miller proves that The Dark Knight has also dark humor, extra grim in fact.

There is no-one perfect in this book, Batman is flawed, Robin is flawed, even Jim Gordon has a mistress. Actually everyone in Gotham City are a bunch of crooks and criminals, with or without a badge or a cape.

Nevertheless, this is a fun, exciting, humorous and quick-paced book – just don’t give it to the kids.

Buy this book  from Ama­zon.com