A Visit to Moscow by Anna Olswanger (illustrated by Yevgenia Nayberg) is a graphic novel, telling of an American Rabbi visiting Russia, going to see a brother of a parishioner. Ms. Olswanger is a literary agent and author, who worked with award-winning authors and major publishers. 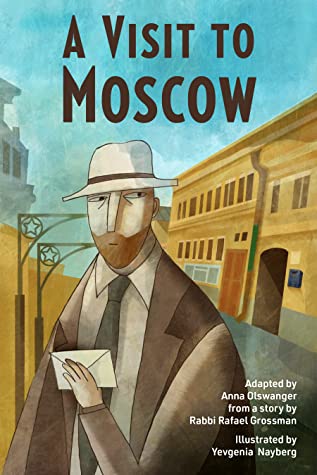 The book was inspired by a true story, as experienced by Rabbi Rafael Grossman. While it is short, A Visit to Moscow by Anna Olswanger (illustrated by Yevgenia Nayberg) is an immersive, and touching read.

Attempting to survive under a totalitarian rule, being surveilled by the state (the KGB in this instance), certainly hits hard. I was absolutely surprised that this short book packs such a punch.

The illustrations by Yevgenia Nayberg are immersive and lush. While they look simplistic, they resemble art from the old Soviet Union, which captures the mood perfectly. Like any other graphic novel, the art also moves the story forward.

This book is historical fiction, based on a true story by Rabbi Rafael Grossman. the authors make it clear in the end of the book. It’s one of those legends that has been passed down from parents to children. It probably has a grain of truth, or for all we know could be nothing but the whole truth.

Nevertheless, the book does have an impact and represents the life of Jews in the Soviet Union. I thought that the vagueness of the story worked, surprisingly. The whole narrative takes place under a dark cloud, in a claustrophobic world. One cannot trust one’s neighbors, not to mention strangers from America.

A well-executed, and immersive story which has many layers. The more one reads this short graphic novel, the more one will find different layers to this seemingly simple story.

An American rabbi travels to the Soviet Union, the year is 1965, and reports of persecution of the Jewish community have been reported. The rabbi is placed on a strict schedule by the Russians but manages to get away from the group and slip away.

Visiting a brother of one of his parishioners, the rabbi discovers the poverty, and fear in which the man and his family live in.

Inspired by the true experience of Rabbi Rafael Grossman, A Visit to Moscow captures the formidable perseverance and strength of the Jewish people during the “Let My People Go” movement, a modern exodus that is often overlooked.

A Visit to Moscow by by Anna Olswanger