“The Sandman: Preludes and Nocturnes” by Neil Gaiman is the collected issues of Sandman #1-8. This is the story of Morpheus, who has been accidentally captured in 1916 by a magician. Morpheus, the Sandman, is an eternal being responsible for sleep and rules over The Dreaming – the place where humans go when they are in an unconscious state. 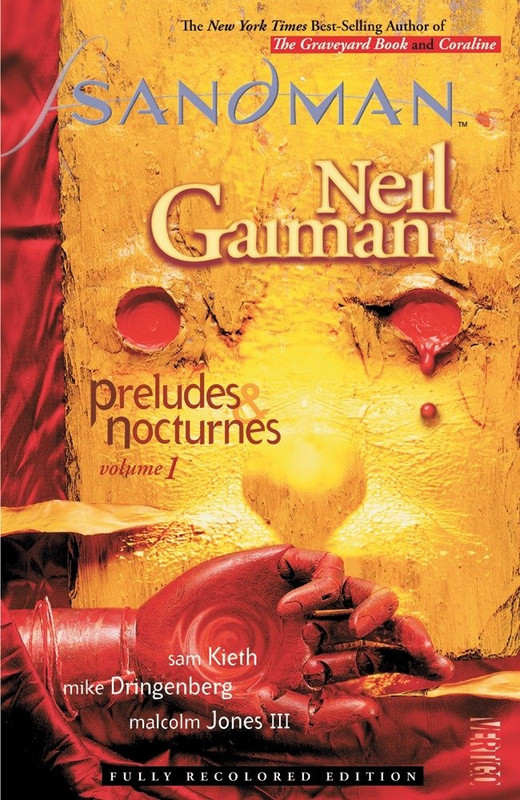 Morpheus was accidentally captured because the magician, Roderick Burgess, was trying to achieve immortality by capturing Death. Morpheus bides his time, when Burgess dies his captor becomes Burgess’ son Alex, but he too cannot get anything out of their elusive prisoner. Accidently Alex weakens Morpheus’ containment spell by running it over with his wheelchair and Morpheus escapes, punishing Alex with a lifetime of nightmares


The weakened Morpheus goes on a journey to recover his symbols of power: a pouch of sand, a helm and a ruby. The pouch is found in the possession of occult detective John Constantie’s girlfriend. To recover the helm Morpheus has to travel to hell where he is guided by the demon Etrigan and meets DC’s version of Lucifer (a beautiful angel with dark wings). The helm is in the possession of the demon Choronzon and Morpheus wins it over in a battle of wits, in which he takes on the form of Hope. The ruby is in the possession of John Dee, better known as Doctor Destiny, a supervillian from the Justice League of America. Dee tricks Morpheus and almost drains all his strength but then shutters the ruby which releases the power that Morpheus needs, restoring him to full strength.The last book, named “The Sound of Her Wings” introduces Death, Morpheus’ sister and is, in my opinion, one of the most brilliant stories I’ve have read. Death is a down-to-earth Goth girl. Young looking and untraditional, Death spends the issue helping her brother with his depression.

The Sandman is a resurrection of an old DC Superhero (previously Wesley Dodds) and is required reading if you want to read and understand the whole Sandman saga. There are characters and events which will have long lasting effects throughout. However, there are some flaws, for example I didn’t like that Gaiman entwined the DC universe so tightly within the story, but that’s all overlooked by the excellent storytelling – a story about stories.

The art much like the stories varies from excellent to just good. Three artists have worked on this book and it shows, from Sam Keith’s cartoony style, to Mike Dringenberg scratchy and moody artwork.“The Sandman: Preludes and Nocturnes” is not a kids book, the stories deal with sexuality, addiction, hell, madness and overall some very unpleasant people. Preludes and Nocturnes – Entire issue available for free download at DC Comics.


Buy The Sandman: Preludes and Nocturnes Amazon.com*
More Books by Neil Gaiman*
Zohar — Man of la Book
Dis­claimer: I borrowed this book from the local library
*Ama­zon links point to an affiliate account