About:
Shadows Walking by Douglas Skopp is a fictional novel about a Nazi doctor battling his conscience after the war. While this novel was difficult to read, it was also difficult to put down.

The author is giv­ing away one signed copy of this book to two winners— enter at the end of the post. 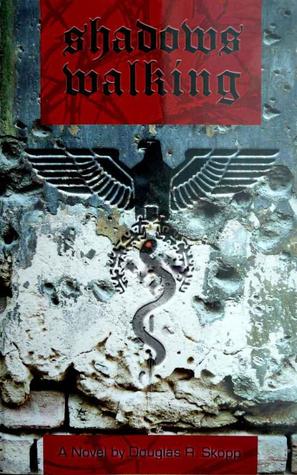 My rating for Shadows Walking – 5

Thoughts:
One of the phenomena which, to me, is fascinating is how people blindly follow others even though they know that the leaders are wrong, manipulative or even worst, that what they are doing is against their own upbringing.

How could people who consider themselves national socialists (Nazis) act to this way towards their own families and neighbors? How could a regime train hundreds and thousands of people to murder civilians, children, women and the elderly? What happened when one suddenly realizes that he or she is the “bad person” in the story of life?

This is one of the questions Douglas R. Skopp (website | Facebook | Twitter) is trying to answer in his fascinating book Shadows Walking. In this book Skopp, who is a historian, uses Johann Brenner, a doctor from Bavaria, as the protagonist who questions himself over his role as a Nazi doctor in Auschwitz.

This is a bleak novel describing some of the medical atrocities which happened in concentration camps in vivid detail. The protagonist, Dr. Johann Brenner, agrees to participate in castration experiments on Jewish prisoners. How Dr. Brenner comes to terms with his heinous acts as well as being conflicted about the role that Jews played in the destruction of Germany (according to Nazi propaganda) weighed against his intimate knowledge of Jewish friends is one of the interesting angles of Shadows Walking.

Dr. Brenner is never a sympathetic character, a very brave choice for a protagonist and a dangerous gamble by the author which paid off. The protagonist is introduced as a Nazi doctor while the story examines how, from an honorable well meaning man he became a part of such harsh acts.

Mr. Skopp, a historian, also goes to length to describe how World War I laid the ground works, in social as well as economical aspects, to the rise of the Third Reich and World War II. I wouldn’t be surprised if in several hundred years historians will combine both world wars into one.

What really struck home, especially after the last 10 years or so is how the false sense of patriotism can play a major role in the way people react in a group. As everyone knows a crowd-mentality is dangerous and can cause good people to do bad thing and, as we saw in Rwanda for example, government sanctioned atrocities can quickly spiral out of control when the populace takes their sense of patriotism to new heights.

So tell me, what book have you read that was uncomfortable to read yet difficult to put down?

Books in similar vein:
Auschwitz: A Doctor’s Eye­wit­ness Account by Dr. Mik­lós Nyis­zli (one of the books used in the research of Shadows Walking)
Child 44 by Tom Rob Smith
The Emperor of Lies by Steve Sem-Sandberg
Field Gray by Philip Kerr
Gated Grief by Leila Levinson

Synopsis:
Dr. Johann Brenner is an idealistic man and a German nationalist. Dr. Brenner has joined the Nazi party out of a sense of patriotism and believes their propaganda even though it clashes with his real world experiences.

After the war ended, Brenner has accidentally taken on a new identity and becomes a janitor in the courthouse where the Nuremberg Trials are being heard. Trying to heal is conscious, Brenner writes a letter to his wife which set up each chapter of the book.

Zohar – Man of la Book
Disclaimer: I got this book for free.
Article first published as Book Review: Shadows Walking by Douglas R. Skopp on Blogcritics.

BOOK BLOGGERS – Have you read Shadows Walking? If so link up your review below:

Leave a Reply to Julie @ Knitting and Sundries Cancel reply