About:
Hitler’s Ashes: How Hitler’s Assassination Leads to the Development of Germany’s Atomic Bomb by John T. Cox is a fictional book in a popular genre known as “what if”. The “what if” genre, also known as alternative history consist of stories in which history has diverged from its known course. 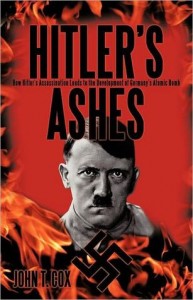 My rating for Hitler’s Ashes – 4

Thoughts:
I know what you’re saying – why are you reading a book about Hitler during this festive part of the year?
My answer: any book where Hitler dies a is a festive book.
Judah Maccabee would be proud.

Hitler’s Ashes: How Hitler’s Assassination Leads to the Development of Germany’s Atomic Bomb by John T. Cox (website | Facebook | @authorjohntcox) is a very imaginative alternative history story. The premise, Operation Valkyrie (the plot to assassinate Hitler) has succeeded and Colonel Claus von Stauffenberg is the new leader of Germany. 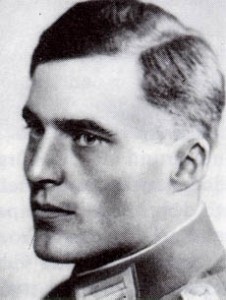 Mr. Cox uses many historical characters and several fictional characters to tell the story. The narrative is flowing and engaging and the characters are developed enough for the reader to enjoy the story through them. There is some attempt by the author at a romantic sub-plot, but I found that cumbersome and the author smartly let it go with a cursory glance.

While I did notice a gap in logic (could Hitler’s assassination really be that easy?) and continuity (China is not a factor in this book) I did think the story to be smart and appealing. I recognize that this is a fictional story, not historical fiction, and the author chose to err on the side of fluid narrative presenting interesting possibilities.

The author’s imagination and premise is very impressive throughout this book. The book doesn’t stop until, almost, it reaches modern times. The preparations Mr. Cox did for the book are fantastic, his knowledge of weapons of the era, including ones that weren’t successful, are very impressive.

This is something which often lacks in historical fiction books. At this day and age, every reader has Google in his or hers fingertips. Any glitch in research would be discovered easily and cause some embarrassment.

So tell me, do you think research is important in fictional books?

Synopsis:
Operation Valkyrie has succeeded. Hitler is dead and so are his henchmen Göering, Goebbels, Himmler and Bormann. Colonel Claus von Stauffenberg, is the new Chancellor of Germany.
Taking away the walls Hitler put up, Stauffenberg and his scientists who are now working at full steam develop the Messerschmitt 262 jet fighter, the Arado 234 Blitz Bomber, and the Type 21 super submarine as well as beating the Americans into developing the first atomic bomb.

Zohar – Man of la Book
Disclaimer: I got this book for free.
Article first published as Book Review: Hitler’s Ashes by John T. Cox on Blogcritics.

BOOK BLOGGERS – Have you read Hitler’s Ashes? If so link up your review below: