Liar, Temptress, Soldier, Spy: Four Women Undercover in the Civil War by Karen Abbott is a non-fiction book focusing on four women who took part in the American Civil War, and were part of history. The women came from both sides of the conflict.

The pub­lisher is giv­ing away one copy of this book  –to enter fill out the Raf­fle­copt­ter form at the end of the post. 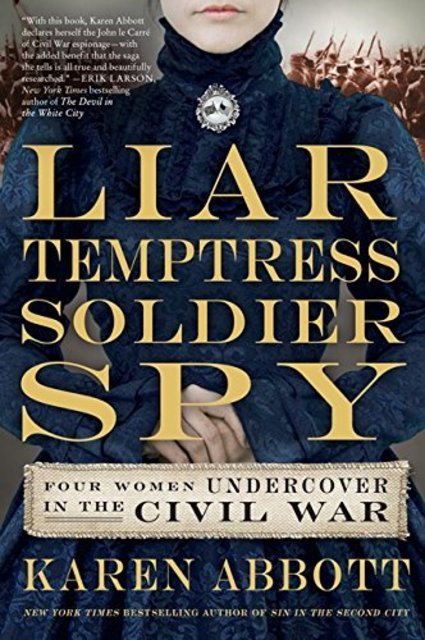 Liar, Temptress, Soldier, Spy: Four Women Undercover in the Civil War by Karen Abbott is an excellent book and a terrific read. The book flows very well and read easily, the author presents the material in a fascinating manner.

The author respects the source material and sues the women’s own words to tell their amazing stories. Ms. Abbott manages to tell four different stories, switching marvelously between them while keep distance and judgment. The author also manages to keep the timeline among the stories to give the reader a clear perspective of the events.

The book humanizes the American Civil War and tells of historical events through a person’s eyes. I also got a sense of what the reality must have been like to be a woman during that time, which left even a stronger impression of the strong character of the four.

The ending was disappointing to me, not because it was badly written or inaccurate, quite the opposite. The ending was true to life, a losing battle in a war where no side “won” and certainly not the four woman who ended up with little for themselves regardless of where their allegiance stood.

This book is certainly one of the best I read this year, I’m glad I read it. I only wish the cover would have indicated that this is a non-fiction, historically accurate account of the time. When I first looked at it, the cover gave me a war/romance novel vibe.

The book tells of four women on different sides of the Civil War. Emma Edmonds who dressed up as a man to fight for freedom on the Union side, and even pretended to be a woman in order to cross the lines and spy on the Confederates. Elizabeth Van Lew, whose former slave Mary Bowser was a spy in the Confederate White House and deserves a book of her own (several exist) and herself, spied for the Union living in under Confederate rule.

On the other side we meet Rose O’Neal Greenhow, a Washington DC society lady who uses her feminine charms on Northern politicians to get information for the South. Last but not least is the boisterous Belle Boyd, who, like many today wanted to become famous while helping the Confederacy.