About:
Anatomy of a Genocide: The Life and Death of a Town Called Buczacz by Omer Bartov tells of the violent history in a small Polish town during World War II, when people who lived side by side their whole lives turned on one another. Mr. Bartov is an Israeli scholars who went off to write a family history and stumbled onto something bigger.

The publisher is giving away 1 copy of this book – enter using the Rafflecopter form at the end of the post. 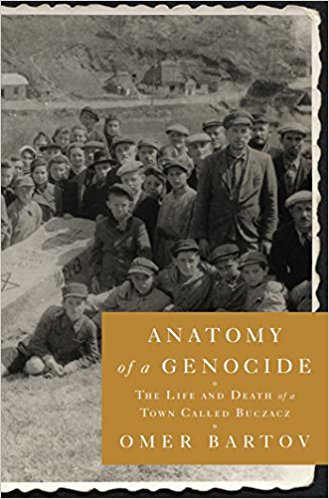 Thoughts:
This is the book I was waiting to read for a long time. I have had interest in World War II for many decades, I read numerous history books and works of fiction, all trying to explain human nature and the brutality which ensued, seemingly out of nowhere.
But we all know that it wasn’t out of nowhere.
And we all know that atrocities don’t just “happen”.

Mr. Bartov’s mother was raised in Buczacz (present day Ukraine), one day on offhand remark to her son raised his interest. Mr. Bartov started digging, trying to learn how his family lived and died.
Mr. Bartov failed to write a family history, but succeeded enormously in writing a fascinating and important book about the European mindset which caused the justification of genocide.

Buczacz lies in the middle of a politically charged region, due to its strategic importance. The town received its unfair attention from rival superpowers which put a microscope to the region and to the populace.

The violence against Jews did not start with the Third Reich, and sadly did not end with its demise. The district which had a population of Jews, Christians, Poles, and Ukrainians all living together relatively peacefully for centuries. Rivalries always exist where people are, Mr. Bartov analyzes those rivalries, especially those between the Poles and Ukrainian, which was made even more complicated when the Nazis invaded. The Soviets plan was to incorporate the region into the Soviet Union, something the Ukrainians embraced and the Poles rejected, the conflict which started before the First World War saw the population of the region reduced by one-third by the time 1945 came around.

So how did ordinary men and women turn on their neighbors during World War II?

As I mentioned, Anti-Semitism started much earlier, when Jews were lumped together with Russians, communists, and savage hordes. Portrayed as aliens which will not be assimilated into the society, Jews were looked upon as a subversive element. During the wars, this false rhetoric was manifested into mass murder. The Germans transformed the local Ukrainian militia into a district police force which committed dreaded atrocities at an “astonishing ease”. People killed those they personally knew, men, women, children, and friends.

This book of the mindset of mass murder and genocide is an important book which is well written and easy to read. Not only an important history book, but a cautionary tale as well.

Buy Anatomy of a Genocide from Amazon.com*
More Books by Omer Bartov