About:
Orphan Train by Christina Baker Kline is a novel of a friendship between a 91  year old woman and a teenager, both of them with a spotted past. 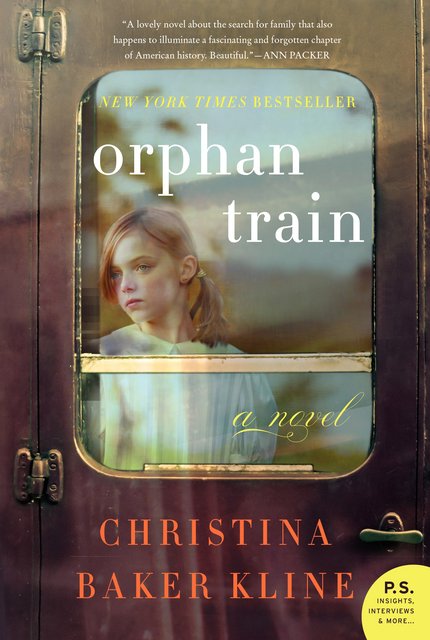 Thoughts:
Orphan Train by Christina Baker Kline is a story told in parallel of two time lines, one of Molly, a 17 year old, and one of Vivian who remembers her time as a child eight decades before on the orphan train. The Orphan Train, a piece of American history, was a welfare program that transported orphaned and homeless children from the east cost of the United States to the rural Midwest. Between 1854 and 1929 about 200,000 orphaned, abandoned and homeless children were relocated.

The book is a vehicle to tell the reader about the orphan train, Molly’s story is there to supply a conversation piece and maybe some parallels to today’s world. Frankly I found Molly’s story not as interesting and the mechanism to have her meet Vivian a bit ridiculous. Molly stole an old library book from some reason (she couldn’t check out more books or something) and, of course, got in trouble for it.  Instead of encouraging the young reader, the “adults”, of course, punish her. This part bothered me, I don’t know if it was meant to pander to readers but the mechanism just didn’t work. After all, which one of us would buy her the book after apologizing to the library, and which librarian would not be secretly happy that a kid wanted to read so bad the resorted to “checking out” extra books.

I did find the whole story of the orphan train itself, fascinating and engaging. We forget how difficult life was in the East coast for immigrants and especially their children. The streets were crowded, dirty and dangerous, if you survived the trip, you now had to survive the trip. Finding yourself in a foreign country, with no parents and being sent thousands of miles away to unknown future must have been terrifying.

Vivian is the only developed character in the book, her story is dramatic and well told. I did enjoy reading the book, it was fun to read and held my attention.

Synopsis:
Molly Ayer, a 17 year old girl who has been kicked around the foster system in Maine for most of her life, has been assigned for community services after stealing a library book. Molly’s community service is done at the house of an elderly woman, cleaning up her attic.

Vivian, who owns the house that Molly is working in, discovers that both women have a lot in common due to their shared childhood experiences, separated by decades.

Zohar — Man of la Book
Dis­claimer: I got this book for free as part of a TLC Book Tours
*Ama­zon links point to an affil­i­ate account