William L. Shirer (23 February, 1904 – 28 December, 1993) was an American journalist, author and war correspondent. Mr. Shirer’s best known work is the a history of Nazi Germany titled The Rise and Fall of the Third Reich. 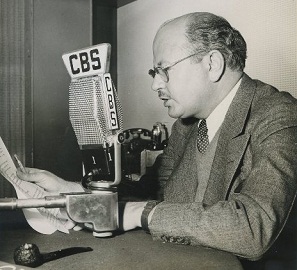 1)      As a college graduate, Mr. Shirer worked his way from his hometown of Chicago to Europe on a cattle boat in 1925. He stayed on the European continent for the next 15 years.

2)      in 1934 Mr. Shirer was hired by the Belin bureau of Universal Service, owned by William Randolph Hearst. Mr. Shirer said that this moves was going from “bad to Hearst”.

3)      As a journalist, Mr. Shirer first came into the public eye during 1940, reporting on the radio on the rise of the Nazi dictatorship.

4)      Mr. Shirer was the first reporter that Edward R. Murrow hired for this CBS radio team which became to be known as “Murrow’s Boys”.

5)      At first Mr. Shirer felt that his voice was unsuitable for radio. At first print journalists were prohibited from talking on the radio (a policy that both Mr. Shirer and Mr. Murrow found absurd), but CBS changed that policy in 1938. At the time, German annexation of Austria happened, Mr. Shirer’s headquarters was in Vienna (a more centralized and neutral place than Berlin) and he was the only American reporter in town – but could not report due to the prohibition mentioned earlier.

6)      Reporting on the German armistice with France Mr. Shirer said “I am but fifty yards from [Hitler]. […] I have seen that face many times at the great moments of his life. But today! It is afire with scorn, anger, hate, revenge, triumph.”

7)      He left Germany in December, 1940 after getting a tip that the Gestapo were setting him up to be tried as a spy, a charge which carries the death penalty.

8)      In 1946 Mr. Shirer received the Peabody Award for Outstanding Reporting and Interpretation of News.

9)      The Rise and Fall of the Third Reich has been cited for more than 5 decades in many scholarly works.

10)   Even though The Rise and Fall of the Third Reich has been Mr. Shirer’s best known work, he has wrote more than a dozen books, including a biography called Twentieth Century Journey encompassing three volumes.