Van Wyck Brooks (16 February, 1886 – 2 May, 1963) was an American historian, critic and biographer. He is best known for his 1952 studies which chronicled the 19th Century development of American literature titled Makers and Finders: A History of the Writer in America, 1800-1915. 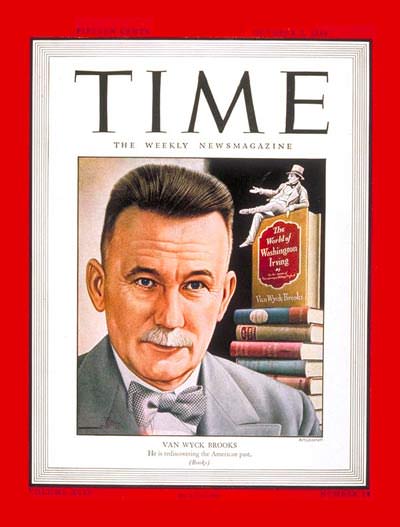 1)      Mr. Brooks was born in Plainfield, NJ to an upper middle class family.

2)      In Van Wyck Brooks: A Writer’s Life by Raymond Nelson, the biographer writes that the young Mr. Brooks was taken on European trips with his parents. In his judgement, he was an already highly educated man by the time he entered Harvard in 1904.

3)      As a student, he published Verses by Two Undergraduates, a book of poetry he wrote with his friend John Hall Wheelock.

4)      After graduating from college, Mr. Brooks worked as a journalist in England.

5)      While working as a journalist, he published his first book The Wine of the Puritans (1908), blaming the English Protestants heritage for America’s cultural shortcomings. He wrote another book on the subject in 1915, America’s Coming-of-Age.

9)      Mr. Brooks made the town of Bridgewater, CT his home. In his honor the town tried to build a library wing in his honor. Unfortunately the town ran out of money and the project was abandoned in 1972. Surprisingly, a hermit in Los Angeles named Charles E. Piggot left money in his will for the library and the addition was built in 1980.
Mr. Piggot has no known connection to Bridgewater, CT.