Tómas Guðmundsson (6 January, 1901 – 14 November, 1983) was a writer and poet from Iceland. He is known as Reykjavíkurskáldið, skáld Reykjavíkur (Reykjavík’s unofficial poet laureate) for introducing Reykjavík in Icelandic poetry. 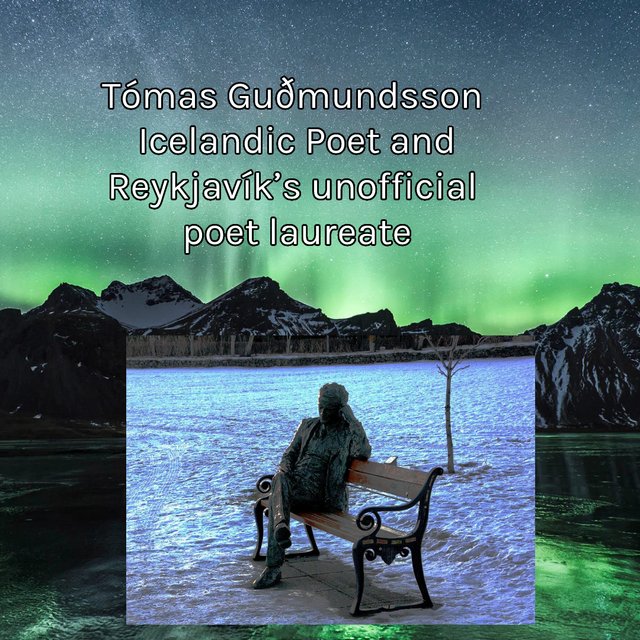 Books by or about Tómas Guðmundsson*

1. Tómas Guðmundsson was born to Steinunn Þorsteinsdóttir and Guðmundur Ögmundsson in Efri-Brú in Grímsnes (basically, the countryside).
2. As a young man, the future poet read Icelandic sagas and other works, he even dabbled in writing his own poems. He especially enjoyed the poetry of Jónas Hallgrímsson (an Icelandic poet and naturalist).
3. Mr. Guðmundsson moved to Reykjavík to study, where he formed close relationships with many authors and poets.
4. Even though he was interested in poetry, he actually graduated with a law degree from University of Iceland in Reykjavík.
5. Tómas Guðmundsson opened up a law office in 1928, but closed it in 1929 and started working as a civil servant, providing statistics for the Statistics Iceland (Hagstofa Íslands) Institute, which was his main job until resigned from the bureau in 1943.
6. At this point, he made his money from writing, translating, and editing a literary magazine.
7. The Fair World (1933, Fagra veröld) established Tómas Guðmundsson as an excellent poet and brought him attention and appreciation.
8. Tómas’ poems were traditional and his style didn’t change much during his career. However, during World War II his works took on a more philosophical look at social issues which were suddenly on the forefront.
9. The poems are translated into many languages, including French, German, English, Swedish, Danish, Dutch, and more.
10. In 1944, the city of Reykjavík created the Tómas Guðmundsson literature award in his memory, as well unavailing a statue of the poet in 2010.

Books by or about Tómas Guðmundsson*

Zohar – Man of la Book
*Ama­zon links point to an affil­i­ate account, the money is usually spent on book