The Three Musketeers by Alexandre Dumas has been one of my favorite novels for years, ever since I was a little boy. I’m glad to see that a new movie has been made, movies of famous books always generate interest in the original and get new following. Alexander Dumas based the book on historical events, but also took great liberties. It seems Dumas was more interested in writing good fiction than accurate history. However, those persons who did exist he captured without many grave errors. 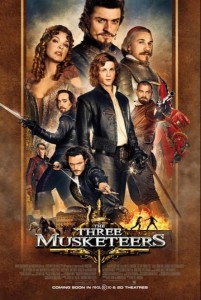 1 ) The book is actually a compilation of serialized stories over four months in 1844 for the magazine Le Siècle. That is why each chapter ends with a cliffhanger.

3 ) The Three Musketeers are Athos, Porthos and Aramis. D’Artagnan does not become a musketeer until the end.

4 ) D’Artagnan is based on Charles de Batz-Castelmore, who also hailed from Gascony and was a distinguished Musketeer under Cardinal Mazarin and Louis XIV.
Porthos is based on Isaac de Porthau, a member of the Captain des Essarts’s company of the King’s Guards.
Henry d’Aramitz related to Monsieur de Treville, and Musketeer from 1640 was the reference for Aramis and Armand de Sillegue, Seigner d’Athos et d’Autevielle, also related to Treville, was who Dumas based Athos on.

5 ) Louis XIII, Anne of Austria, Cardinal Richelieu, and Monsieur de Trevill are all actual historical figures and portrayed somewhat accurately in the book.

6 ) The Three Musketeers is the first part of a trilogy. Together with other books, Twenty Years After and The Vicomte of Bragelonne: Ten Years Later, they are known as the d’Artagnan Romances.

8 ) The 1846 English translation of Les Trois Mousquetaires by William Barrow is still in print today and is said to be very faithful to the original.

10 ) The motto of the Three Musketeers “”One for all, all for one” (Unus pro omnibus, omnes pro uno) is also Switzerland’s motto.