“The Scarlet Pimpernel” by Baroness Emmuska Orczy is an exciting book with some great history behind it. After reading it (book review) I did some research on it and found some amazing and fun facts. 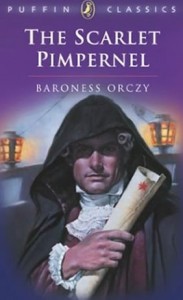 2)       “The Scarlet Pimpernel” was originally written as a play which received negative reviews but popular success.

3)      The book was published after the play opened and was immediately successful.

4)      The novel was translated to at least 16 languages and been adapted to film, television and even a musical.

5)      Due to the success of her novel, Baroness Orczy wrote a whole series of books associated with “The Scarlet Pimpernel”.  The books were not written in chronological order, however for your convince  here they are in the order they might be read:

6)      Several historical figures show up in the book even though it is not historically accurate. The figures are:

10)   The Scarlett Pimpernel books allowed the Baroness and her husband to live comfortably for the rest of their days in the English countryside.

I didn’t know there were more books – more on the TBR list.