Today is the anniversary of Alfred, Lord Tennyson publishing his poem The Charge of the Light Brigade (read poem). The poem commemorates are the actions of British soldiers during the Battle of Balaklava, in the Crimea. 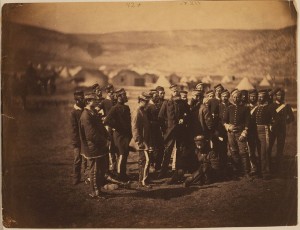 1 ) Six weeks before publishing the poem, Tennyson has been named poet laureate by Queen Victoria.

2 ) The charge was made by the Light Brigade of the British cavalry, consisting of the 4th and 13th Light Dragoons, 17th Lancers, and the 8th and 11th Hussars, under the command of Major General the Earl of Cardigan.

3 ) The order for the battle was “Lord Raglan wishes the Cavalry to advance rapidly to the front, follow the enemy, and try to prevent the enemy carrying away the guns. Troop Horse Artillery may accompany. French Cavalry is on your left. Immediate.”

4 ) The “Valley of Death” referenced in the poem was a valley between the Fedyukhin Heights and the Causeway Heights.

6 ) After reading about the battle in The Times, Tennyson wrote the poem in a few minutes according to his grandson Sir Charles Tennyson.

8 ) The poem became immensely popular and was distributed to the troops in Crimea in pamphlet form.

9 ) While Tennyson meant to support his country, he also wrote about the horrors of war.

10) Rudyard Kipling wrote a postscript poem “The Last of the Light Brigade” in which he intended to shame the English public into taking better care of the veterans.

The Charge Of The Light Brigade

by Alfred, Lord Tennyson
Memorializing Events in the Battle of Balaclava, October 25, 1854
Written 1854

‘Forward, the Light Brigade!’
Was there a man dismay’d ?
Not tho’ the soldier knew
Some one had blunder’d:
Theirs not to make reply,
Theirs not to reason why,
Theirs but to do & die,
Into the valley of Death
Rode the six hundred.

Flash’d all their sabres bare,
Flash’d as they turn’d in air
Sabring the gunners there,
Charging an army while
All the world wonder’d:
Plunged in the battery-smoke
Right thro’ the line they broke;
Cossack & Russian
Reel’d from the sabre-stroke,
Shatter’d & sunder’d.
Then they rode back, but not
Not the six hundred.