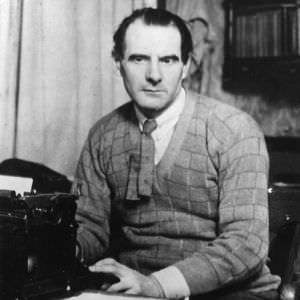 1)      Suffering from poor eyesight, you Mr. O’Casey had trouble at school, but taught himself to read and write by age 13.

2)      His father died with he was six years old, and the family (of thirteen!) had to move from house to house in North Dublin.

3)      At age fourteen Mr. O’Casey left school and started working. Life was hard and he was once fired because he did not take his cap off when collecting his pay.

4)      His birth name is John, but as he got more involved in politics and took up the Irish nationalist cause, he changed his name to Sean.

6)      His 1923 play, The Shadow of a Gunman, was the first to be accepted and performed at the Abbey Theatre, which began a long and fruitful relationship.

7)      Mr. O’Casey is known as the first Irish playwright to write about Dublin’s working class.

9)      He met his wife, Irish actress Eileen Carey Reynolds, while in London to receive the Hawthornden Prize. The couple had three children, the sons Breon and Níall passed away from Leukaemia, and one daughter named Shivaun.