Rudyard Kipling (30 December, 1865 – 18 January, 1936) was an English writer, poet and novelist. Mr. Kipling is best known for his books The Man Who Would Be King and The Jungle Book. 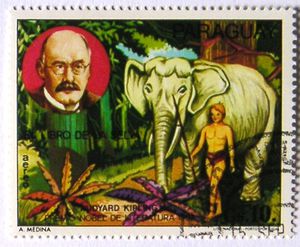 1)      Mr. Kipling was born in India, but was educated in England in a foster home.

2)      His experiences in the foster home are described in the semi-autobiographical book Baa Baa, Black Sheep (and no, they’re not positive).

3)      Rudyard Lake is an English lake in Rudyard, Staffordshire because his parents were so awed by the beauty of the area.

4)      Stanley Baldwin, Prime Minister of the UK, was his first cousin.

5)      While working at the newspaper the Civil and Military Gazette Rudyard was asked to start writing short stories.

6)      Rudyard Kipling met Caroline Starr Balestier though her brother Wolcott Balestier. The two became romantically involved and were married in 1892 and had three children.

7)      Unfortunately, two of the three Kipling children died at an early age. Josephine succumbed to pneumonia and John died in World War I.

8)      After the death of his little daughter, Rudyard Kipling began collating material for children stories

10)   In 1907, 42 year old Rudyard Kipling received the Nobel Prize in Literature. As of the time of this post, he is still the youngest recipient of that prize. Mr. Kipling was also the first English language author to win the prize.