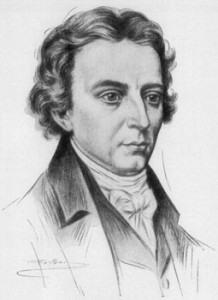 1)      Southey was expelled from school for publishing an essay in the school magazine condemning corporal punishment.

2)      While in Oxford University, Southey and his friend Samuel Coleridge made plans to start a utopian society in America.

4)      Southey’s “Letters from England” (read for free), published under the nom de plume Don Manuel Alvarez Espriella is said to be the most accurate depiction of England in the early 19th Century that exists.

5)      Besides his poetry, Southey was praised for his biographies, including Life of Nelson (1813) (read for free), Life of Wesley and the Rise and Progress of Methodism (1820) (read for free).

7)      The post was available because…Sir Walter Scott refused the honor (and steady paycheck).

8 )      In 1837, during his reign as poet laureate, Southey got a letter from a young lady named Charlotte Brontë asking advice on her poems.

9)      Southey praised Brontë’s talents but also added that “Literature cannot be the business of a woman’s life…”.

10)   Southey is credited with introducing, or popularizing, many words in English including “autobiography”.

Article Name
Fun Facts Friday: Robert Southey
Description
On this day in 1774 Robert Southey (12 August 1774 – 21 March 1843), England’s poet laureate from 1813 until his death in 1843, was born. While Mr. Southey seems to have been forgotten by today’s world of poetry, in his time he was widely read and admired.
Author
Man of la Book
Publisher Name
Man of la Book - A Bookish Blog
Publisher Logo