Tomorrow is the birthday of famed Polish author Joseph Conrad (December 3, 1857 – August 3, 1924). Reading Conrad’s work one could see his development of an author from adventure stories to sophisticated works. 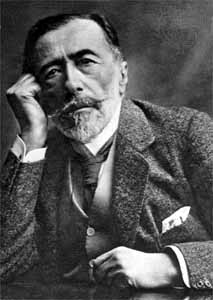 1 ) Born Józef Teodor Konrad Korzeniowski and spent his early childhood in Russia with his parents. His father, a Polish poet was in exile.

2 ) His father also translated Victory Hugo from French, Charles Dickens and Shakespeare from English into Polish.

4 ) At age 17 Joseph joined the merchant marines sailing to the West Indies. His adventures were the settings for some of his works.

5 ) At 21 Conrad got a job as a deck hand on a British freighter. He spent 16 years with the British merchant navy.

7 ) Commanding a steamboat on the Congo River was later developed in Heart of Darkness.

8 ) Conrad’s experience in gunrunning and political conspiracy were fictionalized in his novel The Arrow of Gold.

9 ) Conrad’s first novel, Almayer’s Folly was published in 1895. In 1896 he met Jessie George, married her and gave up the sea to start writing full time.

10) Considered one of the great writers in English, Conrad never lost his Polish accent.