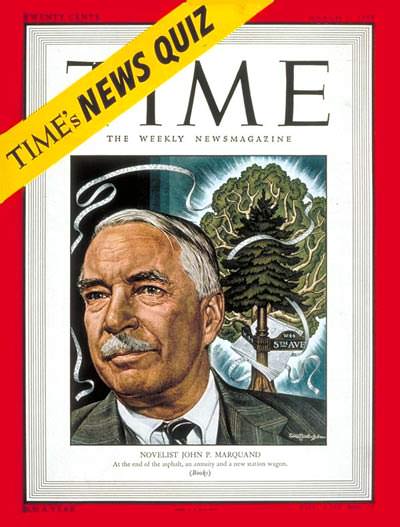 1)      Mr. Marquand was born in Wilmington, DE but grew up in the Massachusetts.

2)      He was the great-nephew of Margaret Fuller, a writer from the early 1800s who was an early advocate of women’s rights. She wrote the Woman in the Nineteenth Century which is considered the first major feminist work in the United States.

3)      Mr. Marquand went to Newburyport High School in Massachusetts, living in town with his aunt in a crumbling mansion.

4)      In high school, the future author was awarded a scholarship which allowed him attend Harvard College.

5)      As a graduate of the public school system, he was an outsider during his college years. He was turned down by the Harvard Crimson, the college paper, but was on the editorial board for the Harvard Lampoon. After college he was hired by The Boston Evening Transcript.

6)      During World War I, while in college, Mr. Marquand joined the Massachusetts National Guard, Battery A.

7)      Mr. Marquand’s writings focused on American society and the class dilemma of New England. A satire of Boston’s upper class, The Late George Apley (1937), won the author the 1938 Pulitzer Prize.

8)      His popular spy series, Mr. Moto, which appeared from 1935 ato 1957, was a commercial success and even inspired a series of movies starring Peter Lorre.

9)      Several of Mr. Marquand’s books became movies, however the resemblance of the book’s plot to the movie are mostly in passing.

10)   Even though he made fun of America’s upper class, Mr. Marquand was not too proud to join them when asked. He forgave his Harvard classmates for their snubs, he got to join the “right” clubs of high society in Boston and New York, and his second wife was the sister in law of John D. Rockefeller III.