Today is the birthday of author Jane Austen (16 December 1775 – 18 July 1817). Ms. Austen is one of the most wildly read authors in English literature whose social commentary has taken on a life of its own. 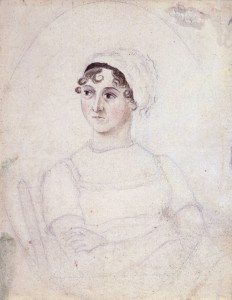 1 ) Jane Austen was the seventh of eight children.

2 ) Jane wrote six complete novels Northanger Abbey, Sense and Sensibility, Pride and Prejudice, Mansfield Park, Emma and Persuasion. She got to see four of them published.

3 ) Cassandra Leigh Austen married into a lower class, but still gave Jane the sense of social class which one can take from her novels.

4 ) Jane sharpened her comic abilities on her Oxford educated brothers.

5 ) Jane was part of the “Romantic Movement” of the time which was a counter to the conservative movement.

6 ) Pride and Prejudice, which deals with feelings, could be considered part of the Romantic Movement even though it is still rational.

7 ) Jane’s brother Frank was a career man in the British navy. Through him Jane gained her knowledge of life at sea which she wrote about in Persuasion.

8 ) Jane’s first love was Tom Lefroy, a nephew of her close friend. When the two became serious Tom was hurried out of the country since marrying Jane would disinherit him. Tom Lefroy later became the Chief Justice of Ireland.

9 ) Jane’s second serious romance was a clergyman she met while vacationing in Sidmouth at the summer of 1801. However, he died unexpectedly before being able to meet her family (a sign that he was going to propose).

10) The first draft of Sense and Sensibility was done sometime in the 1790s. However Jane revised and rewrote it before it was finally published in 1811.

Article Name
Fun Facts Friday: Jane Austen
Description
Today is the birthday of author Jane Austen (16 December 1775 – 18 July 1817). Ms. Austen is one of the most wildly read authors in English literature whose social commentary has taken on a life of its own.
Author
Man of la Book
Publisher Name
Man of la Book - A Bookish Blog
Publisher Logo