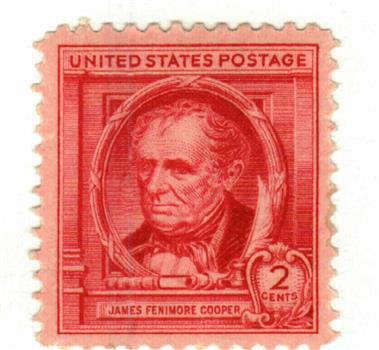 3)      At age 13 the author was enrolled in Yale University. In his third year, Mr. Cooper was expelled without completing his degree due to some stunts he pulled (blowing up a student’s door and locking a donkey in the recitation room among them).

4)      Mr. Cooper went on the US Navy (a fledgling outfit at the time) and became a midshipman. The officer’s warrant confirming his rank was signed by Thomas Jefferson. Later in life he published The History of the Navy of the United States of America (1839), after 14 years of research.

5)      After his father’s death, young James Cooper found himself a man of means and married the wealthy Susan Augusta de Lancey. The couple had seven kids, five of whom lived to adulthood.

6)      The first novel Precaution (1820) was written because Mrs. Cooper bet her husband that he could write a novel better than the one she was reading. The novel was published anonymously and received positive reviews.

8)      Mr. Cooper was the first major American writer to include Native-Americans and African-Americans in his works.

9)      The novel Last of the Mohicans is regarded as his masterpiece.