On 21 September, 1886 great British novelist H. G. Wells was born in Kent, England. Known sometimes as “the Father of Futurism” but mostly as “the Father of Science Fiction”, Well’s works continue to be popular to this day. 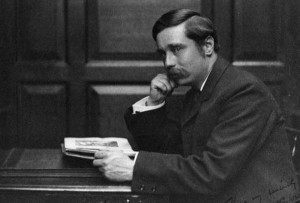 1 ) The Time Machine was an instant success, it has been described as an “overnight literary sensation”.

2 ) Wells was a Socialist and wrote his views in Outline of History.

3 ) Wells revisited the theme of class conflict in other books after The Time Machine.

4 ) Wells writing output was amazing, he published the The Island of Doctor Moreau in 1896,The Invisible Man in 1897 and The War of the Worlds in 1898. For a time, Wells’ average was three books a year.

5 ) In 1938 Orson Wells broadcasted The War of the Worlds on radio claiming aliens landed in New Jersey and caused a massive panic because the format was that of news bulletins.

6 ) As a book reviewer for the Saturday Review, Wells endorsed James Joyce and Joseph Conrad.

7 ) Wells published a non-fiction book of his predictions called Anticipations in which he forecasted economic globalization, rise of cities and suburbs as well as remarkable accurate predictions of military conflicts.

8 ) The three volume The Outline of History, published in 1920 was Wells’ best selling work during his lifetime.

9 ) Being an internationally famous author and intellectual helped Wells meet some important figures during his travels. In 1920 he met Lenin and Trotsky when he was in Russia, a decade later he talked with Stalin and FDR.

10) Wells did not let marriage get in the way of having other relationships. He had numerous affairs, some which bared children and lived apart from his wife.

This post was originally published as Fun Facts Friday: H.G. Wells on 21 September, 2012