Yesterday I posted about the book Eleanor Roosevelt’s Life of Soul Searching and Self Discovery by Ann Atkins (my thoughts) which is the first in the “Flash History” series. Mrs. Roosevelt has always been a fascinating historical figure and I was happy to learn more about her. 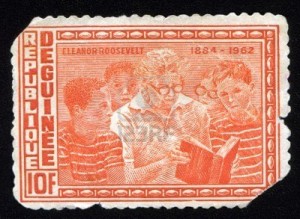 1 ) Eleanor Roosevelt was educated by private tutors till the age of 15.

2 ) Her mother called her “Granny” because she was so serious and old-fashioned.

7 ) The only thing Eleanor Roosevelt knew how to cook was scrambled eggs.

9 ) In a 1951 Eleanor Roosevelt listed 7 people who shaped her life for a Look Magazine article. The first two were her father and mother: her father provided her love and reassurance, and her mother gave her the unattainable goal of perfection. Madame Marie Souvestre, headmistress and a teacher at Allenswood School, gave her a sense of confidence, and her Aunt Pussie (Mrs. W. Forbes Morgan) taught her discipline.