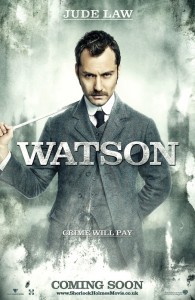 3) Watson attended the University of London Medical School and worked worked at St Batholomew’s Hospital in London as a staff surgeon before joining the English Army in World War I.

4) Coming back from the War, after being wounded, he heard about someone wanting a roommate to share expenses on Baker Street. That was how he met Sherlock Holmes.

5) “Elementary, my dear Watson” is the detective’s famous catchphrase. However, he never actually uses that phrase in any of the books.

6) Dr. Watson is the narrator of most of the Holmes books.

7) The good doctor is not only an excellent surgeon and healer, but also described as an excellent marksman with firearms.

9) Dr. Watson was a precursor to many sidekicks of great fictional detectives such as Captain Arthur Hastings (Agatha Christie‘s Hercule Poirot) and Archie Goodwin (Rex Stout‘s Nero Wolfe). The name “Watson” has become synonymous with a character used as a bouncing board. One who doesn’t draw conclusions from enigmatic statements made to them.

10) The debugger in MS Windows is named “Watson”.