Tomorrow, 21 April will be the birthday of author Charlotte Brontë who was born in 1816. While I did not care much for Jane Eyre , I did appreciate its literary qualities. Check out my Fun Facts Friday on Charlotte’s sister, Emily. 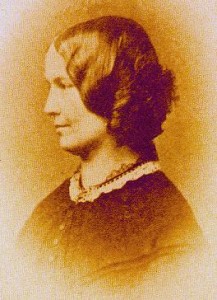 1 ) Charlotte Brontë was the only one of her sisters to live past the ripe old age of 31.

2 ) The author’s most famous work, Jane Eyre, was originally published in 1847 under the nom-de-plume Currer Bell.

3 ) After Jane Eyre was published, the Brontë family suffered three tragedies in eight months. In September 1848 the family’s only son, Branwell, died, Emily died in December of 1848 and Anne died in May 1849. Charlotte stopped writing for a while but continued her second novel, Shirley, after Anne’s death as a way of dealing with her grief.

4 ) As a way of gaining attention to her Shirley, Charlotte sent copies leading authors of the time including Elizabeth Gaskell.

5 ) Charlotte’s third book, Villette, was the last one published in her lifetime. As her previous novels, the book has some autobiographical aspects. The novel was acknowledged as having sophisticated writing, but criticized for its “coarseness” and not being suitable for women.

6 ) After the success of her novels Charlotte was convinced by her publisher to reveal her true identity and visit London. Charlotte was accepted in higher social circles and struck several friendships and finally met Mrs. Gaskell.

7 ) While not what would be considered close, Charlotte and Gaskell’s relationship was significant enough for Mrs. Gaskell to write a biography of Charlotte in 1855, after her death. The Life of Charlotte Brontë took the unusual route of concentrating on Charlotte’s private life rather than her achievements.

8 ) Charlotte was the only one of her sisters to marry. She married in 1854, eight months before she died on 31, March 1855. Unfortunately her child died as well.

9 ) While the official cause of death is tuberculosis, recent speculations suggest that Charlotte may have died of dehydration and malnourishment from excessive vomiting brought on by severe morning sickness.

10) Charlotte is interred in The Church of St. Michael and All Angels in Haworth, West Yorkshire, England in her family’s vault.