Art Buchwald (20 October, 1925 – 17 January, 2007) was an American writer best known for his humorist column in the Washington Post, which was syndicated in many other newspapers and a published more than 30 books. 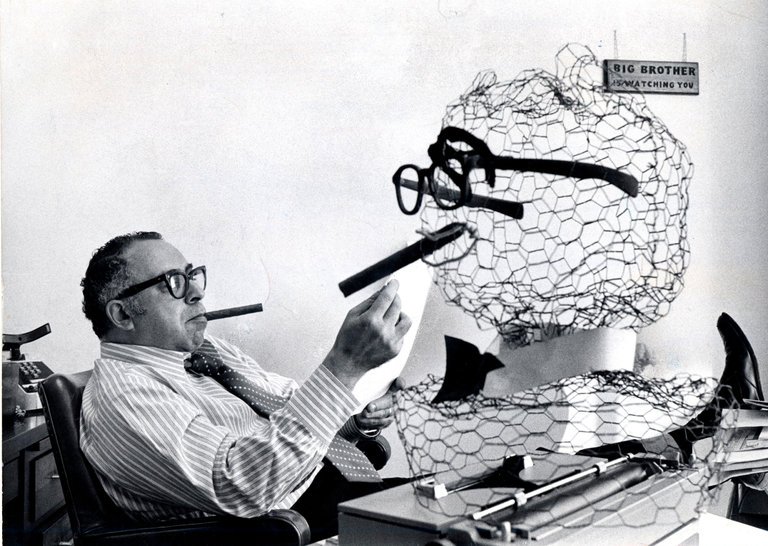 1)      Mr. Buchwald was born in New York City and had a pretty rough childhood. The family’s curtain manufacturing business failed during the Great Depression and he was put in the Hebrew Orphan Asylum before moving through several foster homes.

2)      The family eventually reunited but it seemed that the young man still had a tough time, he ran away from home at age 17, never finishing high-school.

3)      He wanted join the Marines when World War II started, but was too young. Never to be underestimated, he bribed a drunk with half a pint of whiskey to sign as his legal guardian. He served for three years, two of them in the Pacific and was honorably discharged as a sergeant.

4)      Even though he didn’t have a high school diploma, Mr. Buchwald was still enrolled in the University of Southern California, Los Angeles upon his return from the war on the G.I. Bill. Because he had not graduated high school he was ineligible for a degree.

5)      After college he moved to Paris and got a job with Variety. He started to write a column which soon found audiences both in Paris and the US.

6)      The column he wrote in 1952 trying to explain Thanksgiving to the French was one of his favorites and was published every year during his lifetime.

7)      In Paris he met his wife, Ann. Together the couple adopted three children.

8)      He once wrote a humoristic column describing a fictional press conference President Dwight Eisenhower gave while reporters asked him about his breakfast habits. Jim Hagerty, Eisenhower’s press secretary took the column seriously and blasted reporters.
Needless to say Mr. Buchwald got a kick out of it.

9)      At his height, Mr. Buchwald’s columns were syndicated at more than 550 newspapers.

10)   In 1988 Mr. Buchwald sued Paramount Pictures stating that the script for the film Coming to America (starring Eddie Murphy) was stolen from him.
He won!
You can read about the case in the book Fatal Subtraction: The Inside Story of Buchwald v. Paramount by Pierce O’Donnell and Dennis McDougal.