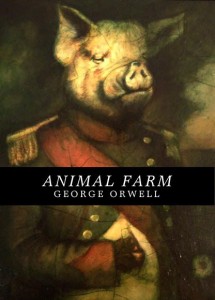 3) Napoleon, rising to power thru force, is paralleled to Joseph Stalin.

4) Snowball, an animal with good ideas, good intentions who was forced out and blamed for all things wrong, is paralleled to Leon Trotsky.

5) The books original name was “Manor Farm”, which ended up being the name of Mr. Jones’ farm.

6) Orwell wrote the manuscript in 1943-44 after experiencing the Spanish Civil War. Witnessing the misinformation campaigns Orwell wrote “how easily totalitarian propaganda can control the opinion of enlightened people in democratic countries.”

7 ) Orwell had a hard time publishing the book. Publishers feared that the book will break the fragile alliance between the US, UK and the USSR.

8) One publisher did accept the manuscript but declined after a word with the Ministry of Information.

9) The civil servant who warned off the publisher was later found to be a soviet spy.

10) One of the publishers who refused to publish “Animal Farm” was Faber and Faber. The director of the firm, famed poet T.S. Eliot praised Orwell’s writing and integrity however declined to publish due to the pro Trotsky point of view.