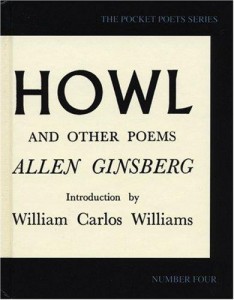 2) “Howl” is considered one of the great works of the Beat Generation (along with Kerouac’s “On the Road”).

3) Supposedly, Ginsberg wrote the poem in a coffeehouse known today as the Caffe Mediterraneum in Berkeley, California.

4) The poem was written as a performance piece.

6)  The poem celebrates “angel-headed hipsters” and criticizes capitalism and conformity.

7 ) “Howl” is dedicated to his friend Carl Solomon whom he met in a mental institution.

8 ) Many considered the reading of “Howl” as the beginning of a new movement.

9 ) After Part I of “Howl” was published, Ginsberg wrote Part II, Part III and a footnote to boot.

10) Michael McClure wrote: “Ginsberg read on to the end of the poem, which left us standing in wonder, or cheering and wondering, but knowing at the deepest level that a barrier had been broken, that a human voice and body had been hurled against the harsh wall of America”.